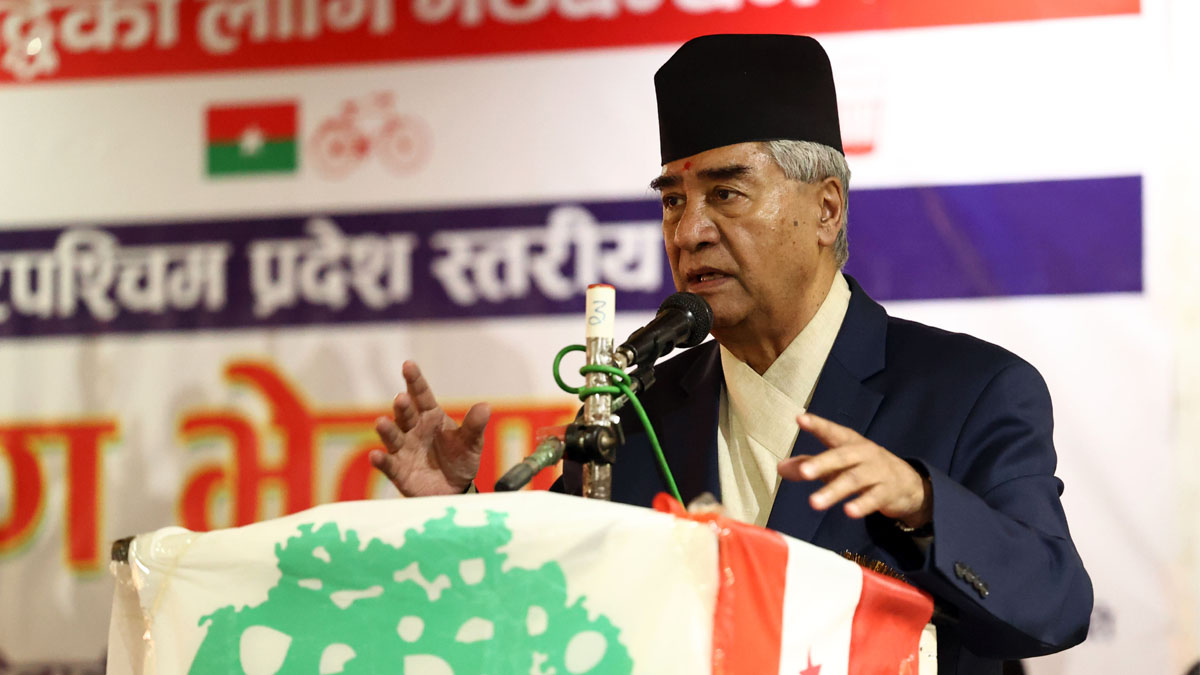 Nepali Congress President and Prime Minister Sher Bahadur Deuba has said the five-party ruling alliance was formed to safeguard the Constitution, the democratic republic, and federalism and for the development and prosperity of the nation.

In his address to a joint province-level party gathering organized by the alliance at Dhangadhi today, the Prime Minister was of the view that the results of elections to the HoR and the PA would determine whether we were for safeguarding the Constitution and promoting the institutionalization of federalism. He urged one and all to get united in favor of the Constitution and federalism.

Urging voters to have trust in the Alliance, he said the Alliance was the need for the nation’s development and prosperity. He also urged party leaders and cadres to follow the sentiments of the Alliance.

He took time to say that he was in the post of Prime Minister due to support of parties in the ruling alliance.

Ruling out the allocations of tickets to all in the polls in the context of the need for an election alliance forged, he assured that those ruing they’re being deprived of tickets this time would get new opportunities after a coalition government would be formed after the polls.

Saying the Alliance was formed in a specific situation through a big struggle, the chairperson of the CPN (Maoist Center) and former Prime Minister Pushpa Kamal Dahal ‘Prachanda’ reiterated that the present Alliance was formed to safeguard the constitution, democracy and changes achieved so far and drive the country on the path to development and prosperity.

Stating that another alliance has also come into being in the country at present, he said, “This latest alliance has this culture, goal, and tradition of derailing the constitution in one way or the other, reversing the republic and weakening the federalism.”

The CPN (Maoist Centre) Chair said that although important political changes have been made in the nation since 2007 BS, a sense of despondency has increased among the people over the years and the change begins to peter out due to the failure to carry out accompanying works for economic change and establishment of good governance.

“The political change can be made sustainable by pushing ahead the economic development and prosperity campaign once the ruling coalition became victorious in the elections,” he reiterated.

CPN (Unified Socialist) chairperson and former prime minister Madhav Kumar Nepal said that had the parties in the present ruling coalition not taken timely steps, the country would have taken the path of regression with the thwarting of achievements made after the political change.

He claimed that the five-party ruling alliance was formed with a pious goal and it was natural.

“The alliance that has been forged with an ulterior motive is unnatural,” he said, referring to the electoral alliance forged by the main opposition CPN (UML) with RPP and other parties.

Saying the present ruling alliance had to be forged to do away with the aberrations in politics, governance, society, and political parties, the Unified Socialist chair cautioned that democracy and the republic were still at risk from what he called regressive elements. Therefore, these regressive elements have to be defeated in the upcoming elections, he added.

Nepali Congress senior leader Ram Chandra Poudel also reiterated that the present ruling alliance was made for protecting the constitution.

Executive Chair of Rashtriya Janamorcha, Rashmi Raj Nepali argued that the present five-party alliance was forged to defend the constitution. He said his party joined the alliance as it saw the danger of the derailment of the constitution and the country moving the way of regression. (RSS)