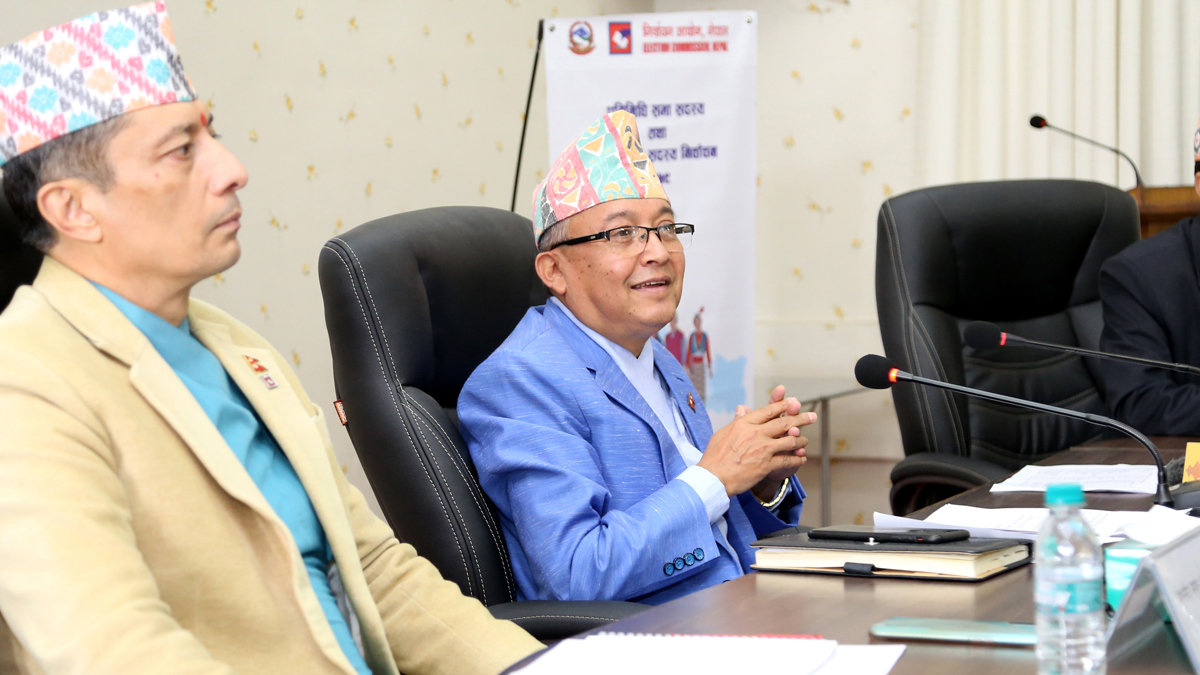 Chief Election Commissioner (CEC) Dinesh Kumar Thapaliya has urged the private sector industrialists and businesspersons to help make the environment conducive for the November 20 election to the House of Representatives and Province Assembly member.

He said so while addressing to a programme entitled ‘Interaction with Private Sector’ organised at the Commission today. The programme had the participation of leading private sector organisations and individuals.

On the occasion, CEC Thapaliya urged the entrepreneurs and business sector to also disseminate the Commission’s information and messages through their information mechanism as part of their corporate social responsibility.

He asked them to connect to the Commission’s social site and disseminate through their organisational mechanism and social sites the election-related resources as the voter education, election code of conduct and related messages and information produced by the Commission.

Reiterating that the cooperation of the entrepreneurs would be important for the nation and democracy, the Chief Election Commissioner also urged them to facilitate so that the employees working in their organisations would be able to cast their votes on the voting day. He said that the country’s economy was at a very difficult juncture at present and expressed his confidence the situation would change for the better after the election.

“We are hearing about liquidity crunch, increment in interest rate and dwindling savings. This has created a situation that looks like the entrepreneurs will start leaving their businesses. This is also related to the election in one way or other. It is our hope that the election will help take the economy towards the positive direction after its conclusion,” he said.

Stating that the global practice shows the expenditure in election is mostly unproductive, CEC Thapaliya asked for forgiveness with the private sector business community if they have been inconvenienced by the Election Commission’s efforts to making the election economical.

He informed that home work was being done for allowing the essential service vehicles and other vehicles as well to operate on the day of the election in a systematic and regulated way on the basis of need and relevance.

Federation of Nepalese Chambers of Commerce and Industry (FNCCI) acting president Chandra Dhakal expressed his happiness, saying the Election Commission has interacted with the private sector also in connection to making the election successful. He expressed commitment to implementing the Commission’s request through his apparatus.

FNCCI vice-president Anjan Shrestha urged the Election Commission to allow the entrepreneurs’ vehicles to operate on the day of the voting and to give them the responsibility of election observation.

Ramesh Thapa, President of Nepal Association of Tour and Travel Agents (NATA), expressed the business community’s commitment in implementing the Commission’s request. He also urged the Commission to facilitate the smooth operation of transport services for tourists on election day.

The other participants from the private sector on the occasion suggested the Commission to participate the entrepreneurs’ mechanism in the conduction of the election.(RSS)