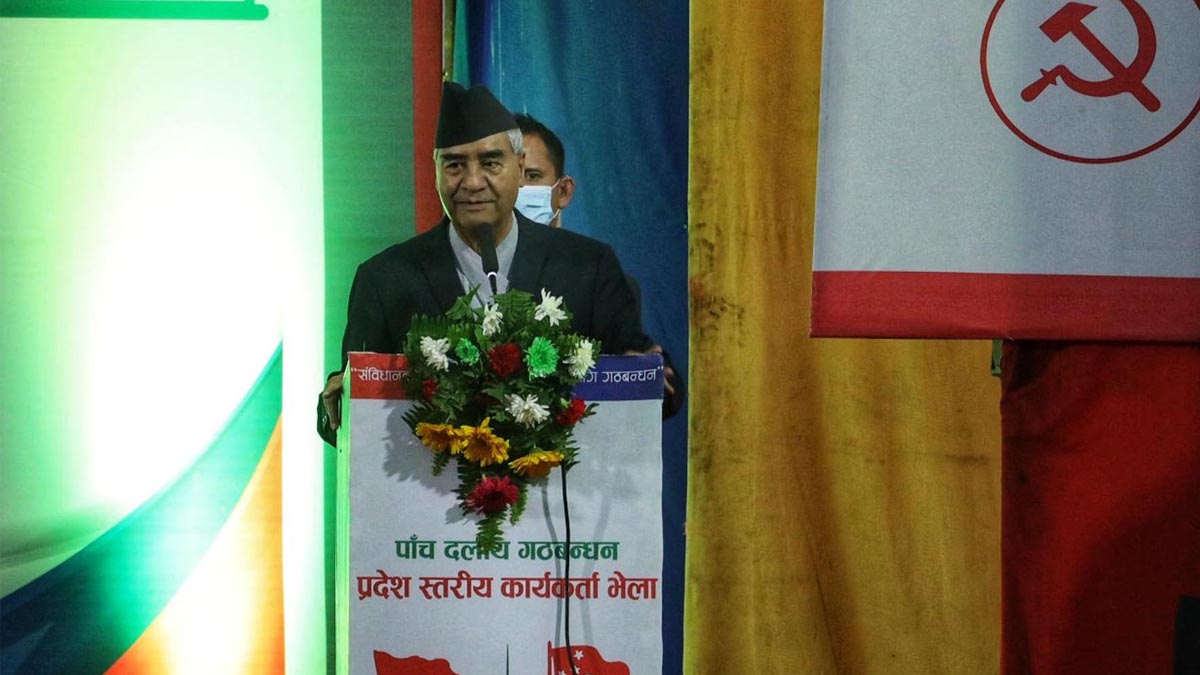 Inaugurating the provincial level assembly of the party cadres organized by the five-party coalition Gandaki Province Committee Pokhara today, PM Deuba clarified that the current coalition meant for protection of constitution, stability and prosperity in the country.

“Inclusion of all contributes to national unity. Nation becomes strong because of national unity. It is a system where there is representation of all,” Deuba said, expressing his confidence that the upcoming elections would protect constitution and promote stability and inclusiveness.

He viewed that it was necessary for the coalition to secure victory in the upcoming election. The House of Representatives and Provincial Assembly elections are slated on November 20 this year.

Stating that no suspicion should be raised regarding coalition under any pretext, he underscored that there should not be any work by anyone that would stem bitterness in speech and behavior.

Furthermore, Deuba revealed that the political parties had to consider entering electoral alliance since there was no possibility for any political party at present to securing a majority.

He further said that the Ninth National Games concluded with grand manner in Gandaki Province and it has further exposed the potentialities of the Province.

PM Deuba stressed on inevitability of the victory of the alliance for the protection of constitution, political stability and prosperity, adding prosperity and development of the country is the need of hour.

Similarly, Chairperson of the CPN (Maoist Centre), Pushpa Kamal Dahal ‘Prachanda’ said the incumbent government was formed not only for the election.

He clarified that the alliance was formed with a broader objective after lots of hard work with a goal of protecting constitution, democracy and nation.

The former Prime Minister shared, “The incumbent alliance was not formed only to get power and win election. There is no other goal except stability, development and prosperity in the country.”

The alliance would exist until the guarantee of changes in people’s living standard, protection of constitution, end of autocracy, and beginning of era of economic development, he mentioned.

Terming the existing alliance of ruling parties is usual and natural, he said this is the major force to safeguard republic.

He also accused the opposition alliance of failing to internalize the essence of republic, federalism and democracy. “The coalition government has been successful to ensure justice to the people, establish equality and take the country towards the path of development,” the leader said.

Nepali Congress senior leader and a taskforce (five parties’ alliance) coordinator Ramchandra Poudel said parties in the alliance rose above the partisan interests as per the national need and united for common goals of the nation.

He claimed that the coalition is not only for going to power but is for the prosperity and development of the nation.

Chief Minister of Gandaki province, Krishna Chandra Nepali Pokharel, said the leaders and cadres of the ruling coalition should realize that not all the aspirants will get the ‘ticket’ for candidacy as the number of seats have to be allocated in a proportional basis.

Nepali Congress Gandaki Province president Shukra Raj Sharma said the coalition should be made victorious in the election for protecting the political achievements and the nation’s development.

CPN (Maoist Center) Gandaki Province chairperson Gayatri Gurung opined that the province-level party workers’ assembly of the coalition parties will help boost the election-related activities and prospects of the coalition.

Nepal Samajwadi Party, Gandaki Province chairperson Hem Bahadur Thapa said that this campaign of the coalition should be developed and taken ahead as a campaign to always defeat the autocracy.