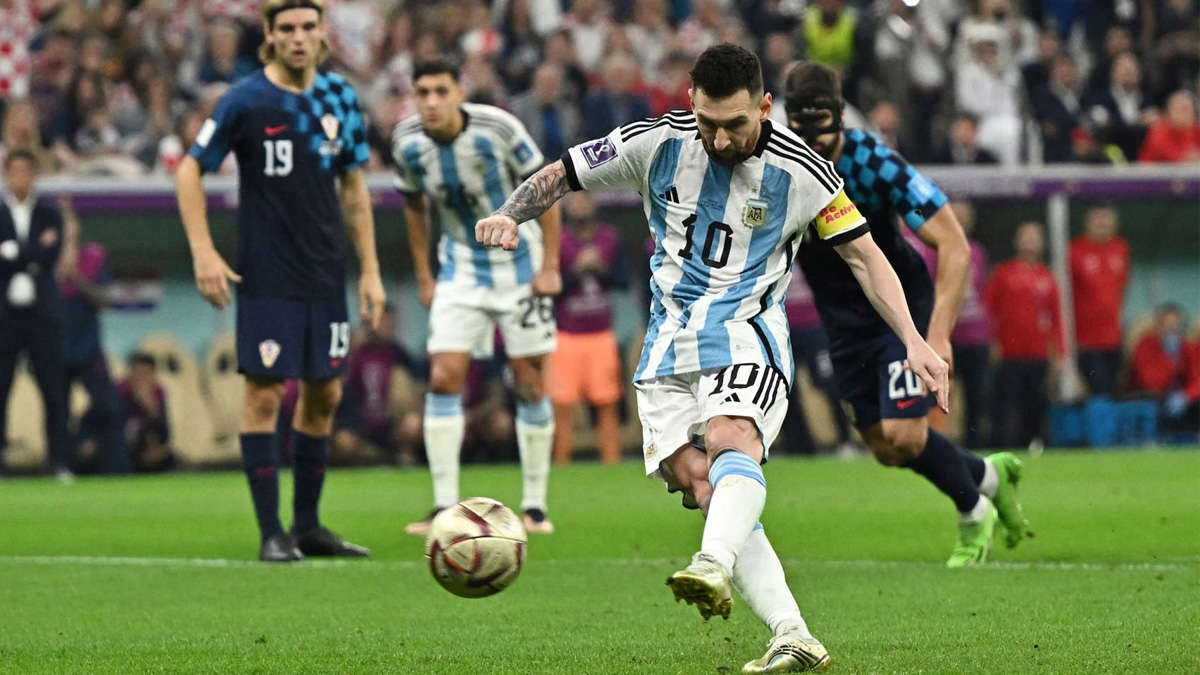 And so, Lionel Messi’s last dance will be in the World Cup final on Sunday and on the biggest stage of them all. Then the music will stop. This tournament, so rich in its football, its drama, its upsets, and so controversial in so many other ways, has the final act it so craved.
It will definitely be Messi’s 26th – an all-time record – and last World Cup appearance and only the holders France, led by his Paris Saint-Germain team-mate Kylian Mbappe, or the greatest underdogs of them all, Morocco, stand in his way as he craves the trophy that has eluded him throughout his storied career. In his fifth attempt it really is his final chance.
FIFA and the Qatari organizers will hope it is Messi v Mbappe; for them an affirmation of the PSG project (as well as hosting the World Cup here in this tiny Gulf state) but do not discount Morocco (and a first Arab finalist).
This semi-final was always going to be about the little man. But which one? Despite Luka Modric’s claim to be the best midfielder of his generation it felt like the narrative was set to be Messi’s and so it proved.
For Croatia and Modric this was the end of the road, a game too far, and with the 37-year-old substituted 10 minutes before the end it really did look like his final appearance. It appeared over but it has been another incredible World Cup for them.
Even so Modric and Croatia were overshadowed. Argentina was driven by their desire, their cussedness, their game-management and their dream of doing it for Messi and that is a potent combination. They played for him and how he played for them.
That Messi did it when he could, at times, barely run because of a troublesome hamstring that surely appeared certain to force him off in the first half made it all the more remarkable and all the more compelling.
That he did so with one of the richest pieces of play this World Cup has seen, to bamboozle Josko Gvardiol – the stand-out defender at the tournament and 15 years his junior – to set up Julian Alvarez’s second goal was even more stunning. It was pure genius from the genius.

And that he did so in scoring his fifth goal of this World Cup, with yet another penalty (his fourth) drawing him level with Mbappe in the race for the ‘Golden Boot’, added yet another sparkling layer.

Quite why Messi ended up playing the whole game when he could barely run was surprising. At the final whistle he again bent double on half-way as his team-mates celebrated but he also had a huge grin on his face. There is no doubt he will start the final, though.

Messi will need Alvarez with the Manchester City striker not only scoring twice, and earning the penalty, but doing all of his running for him. The 22-year-old was utterly relentless as were the Argentinian fans who believe this is destined to be; Messi finally winning the World Cup. They stayed long into the night.

And yet it was the most guarded of cagey starts. If there had been metal bars around the pitch it could not have been cagier and it felt like it would take something surprising to break the deadlock. A piece of sublime skill, a controversy or, in the event, an error. It was all the more shocking because Modric played a part in it by mis controlling the ball near halfway allowing Enzo Fernandez to quickly launch it through the middle.

The Croatian centre-halves were not set with Alvarez running between them and attempting to lift the ball beyond goalkeeper Dominik Livakovic who clattered into him. Penalty.

We all knew Messi would take it but there was added drama.

He had already been feeling the back of his leg and was moving less easily. But there was no way he was not taking it and as Livakovic dived to his left the ball was drove high over him to give Argentina the lead.
Extraordinarily Argentina soon scored again, and it owed everything to Alvarez’s fierce determination, a smart decoy run from Alexis Mac Allister – and Croatia being caught out from their own corner. As it was blocked, they were slow to react. Argentina was fast and aggressive. The ball was played to Alvarez, and he set off from inside his own half, running at the defenders. And running and running.

As he was challenged the ball rebounded back to him from Josip Juranovic and then from an off-balance Borna Sosa and Alvarez just kept going and going and poked it home. If the first goal was Messi; the second was a bit messy.

Up until then Croatia had actually been in control. Their midfield had dominated with Mateo Kovacic, in particular, catching the attention with a couple of surging runs including one that started after he whisked the ball away from Messi.

But of course, Messi re-emerged for the second half and yet was still trying to stretch his hamstring and did so as he twisted and turned and was played in by Fernandez. As he held off Gvardiol, Messi was able to get his shot away with Livakovic parrying.

He would not be denied. Whatever the state of that hamstring Messi was not giving in to it and cut in from the touchline with Gvardiol close to him.

The defender still stayed close, but Messi kept going and when he checked to his right and back onto his left, he had the opening to dart in and wriggle to the byline before coolly pulling the ball back. Alvarez side footed past Livakovic and it was game over.