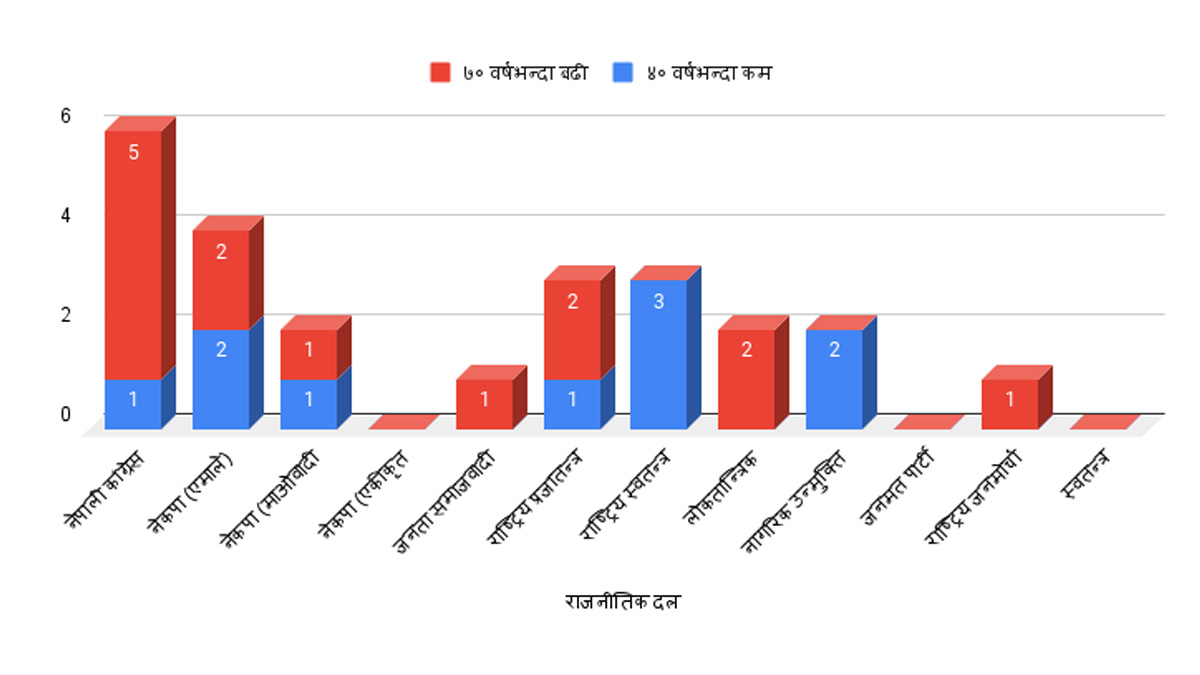 Despite the voices raised for generation shift in politics, the recently concluded election results indicated otherwise. Only around four percent of the total elects under the House of Representatives so far represent young generation.

Out of the total 165 HoR seats, only nine has been occupied by the elected people below 40 years of age.

Similarly, there are 14 candidates above 70 years of age elected under the HoR, according to the Election Commission (EC). So far, 138 elected people’s representatives are between 40-70 age group.

Out of the total 165 HoR seats under the first-past-the-post system, results for 162 seats have been announced as of Friday. Vote count in the remaining three is underway.

The elected candidates below 40 are Yogesh Gauchan Thakali, 29, of the Nepali Congress (Mustang), Jwala Kumari Sah, 40, from Bara-2, Mahesh Kumar Bartaula, 40, from Makawanpur-2, both of the CPN-UML, Amanlal Modi, 37, from the CPN (Maoist Centre) (Morang-4), Gyan Bahadur Shahi, 30, of the Rastriya Prajatantra Party (Jumla), Sobita Gautam, 27, from Kathmandu-2, Toshima Karki, 33, from Lalitpur-3 and Hari Dhakal, 39, from Chitwan-1, all three representing the Rastriya Swatantra Party, and Ranjita Shrestha, 39, from Kailali-1, and Arun Kumar Chaudhary, 37, from Kailali-2, both of the Nagarik Unmukti Party.

The old people’s representatives include Mahantha Thakur, 80, of the Loktantrik Samajwadi Party Nepal (Mahottari-3), and Chitra Bahadur KC, 80, of the Rastriya Janamorcha (Baglung-1).