Ministers have no rights to speak against federalism and republic: PM Prachanda 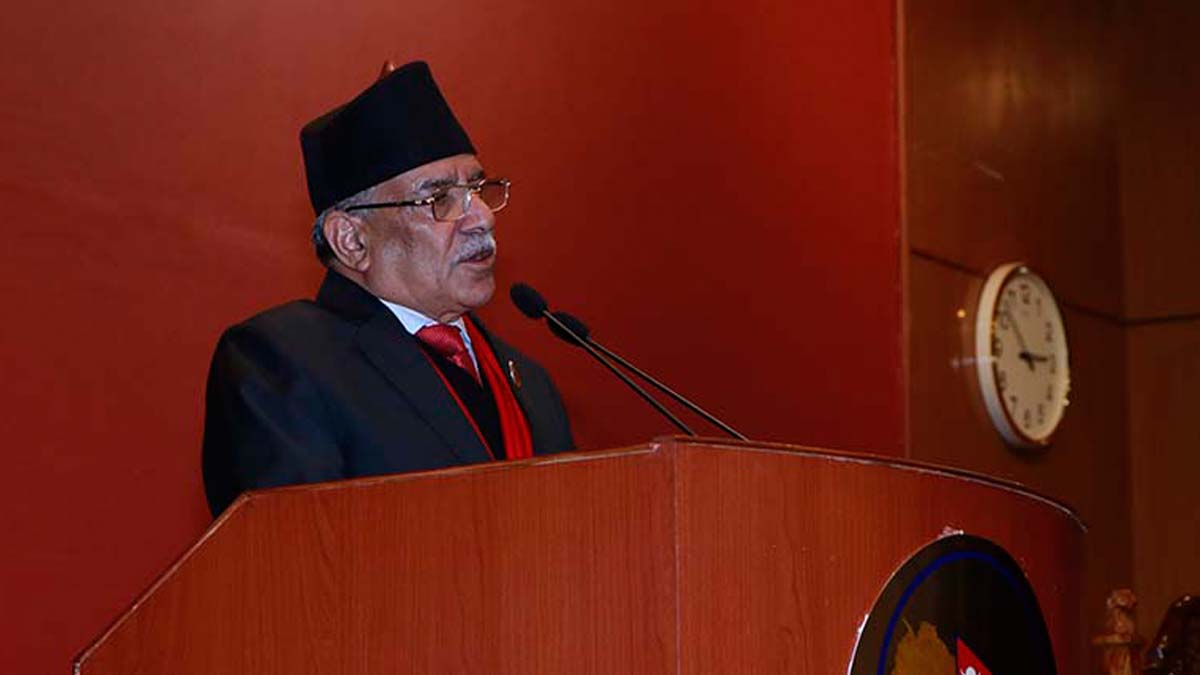 Prime Minister Pushpa Kamal Dahal ‘Prachanda’ has said that no one has the right to speak against federalism and the democratic republic after joining the government.

Responding to the National Assembly (NA) members on their concerns over the report of the Federalism Implementation Study and Monitoring Parliamentary Special Committee at the NA meeting today, the Prime Minister said that the political parties and the lawmakers have rights to put their views in public but they have no right to become critical of the matter while enjoying ministerial portfolio in the Council of Ministers.

Saying that the government was ready to move ahead by doing away with the gaps seen in the implementation of federalism, the PM argued that federal democratic republic, inclusion, proportional representation are the key features of the constitution, which was achieved after a huge sacrifice and contribution of Nepali citizens.
The PM also said that the province and local government are not the federal government’s units and made it clear that they function well through coordination and cooperation.

Noting that profligacy in the governance have fueled public sentiments against federalism, PM Prachanda assured to focus on lawmaking and development by downsizing the number of ministries in the province and axing unnecessary structures.
The PM also pointed out the issues of some delay and reluctance for the implementation of federalism.

The PM said that the government has accorded top priority for the implementation of the recommendation given by the National Assembly, Federalism Implementation Study and Monitoring Parliamentary Special Committee in October 2022.

On the occasion, the PM said that the recommendations of the Committee have been forwarded to the ministries and concerned authorities for their implementation after their classification.

For this, Ministry of Finance, Ministry of Land Management, Cooperative and Poverty Alleviation and Ministry of Federal Affairs and General Administration would carry out their functions on the issues under their scope.

For the works to be carried out from the Office of the Prime Minister and Council of Ministries, the recommendations have been classified as per the concerned divisions and are sent to those divisions accordingly.

“After I took over the premiership, I have issued 30-point directive to the secretaries of the government. The point no. 11 is about preparing plan of actions for reforms to make service delivery of education and health care service more qualitative and effective,” the PM informed the NA.

Likewise, PM Prachanda reiterated that the concerned sides and officials have been asked to prepare for tabling the Federal Civil Service Act in the coming session of the parliament so that there will be no crisis of the human resources in the province and local levels.

The government’s common minimum programme has given top priority for the formulation of laws needed for strengthening of the local levels and province as well as the implementation of federalism and finalizing the under-consideration bills in the parliament is also a top priority.

Furthermore, the intergovernmental relations and jurisdiction of the three tiers of government would be implemented as per the constitution, the PM stated.

Sharing the fact that one-third participation of women is guaranteed in the House of Representatives (HoR) and province assembly for the inclusive representation, the PM said the Commission for the Investigation of Abuse of Authority (CIAA) would be equipped with needed resources including human resource while high priority is given to ensure resources to the National Vigilance Centre (NVC) for corruption control measures.

In order to make the public service delivery more effective, the time incurred in the government agencies would be cut short by one-third and the service delivery mechanisms would be made service seeker-friendly, prompt, accessible, economic and technology-friendly. Furthermore, the officials would be held accountable along with adoption of online system in some areas of service delivery.