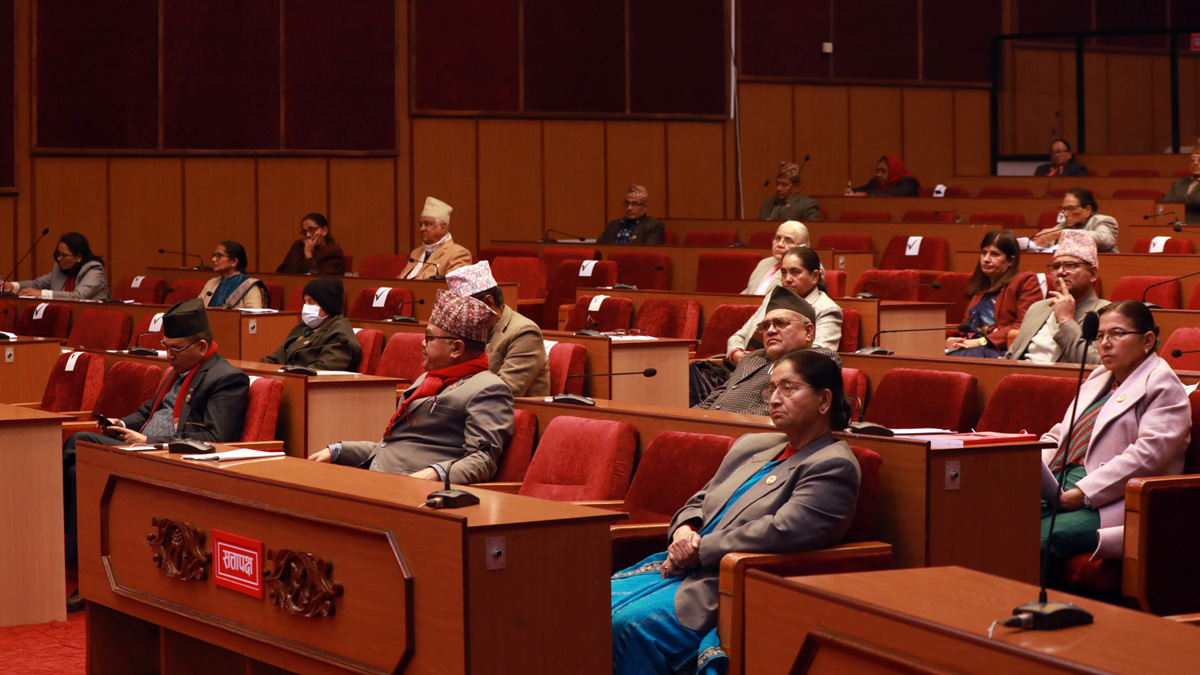 The government’s attention has been drawn towards promoting country’s law and order, concluding the peace process, preventing corruption and improving the road and travel safety. In addition to this, the government has been urged to come up with measures for the respite of citizens from cold.

Airing their views during a special hour of the National Assembly (NA) today, the lawmakers said they hoped the newly constituted government would find a way for taking the nation towards the path of development, prosperity and good-governance.

CPN (Maoist Centre)’s Nar Bahadur Bista advised the government to work with the goals of achieving better peace and security, concluding the peace process and promoting good governance and prosperity, expressing his hope it would be able to address the aspirations of the nation and the people.

UML’s Tulasa Devi Dahal said imbalanced domestic migration had its impact on proportional distribution of population and social diversities and the government had been expected to intervene on timely for the management of such issues. “To prevent corruption and promote good governance are the needs of the hour. People in the Terai and the southern plains should be provided warm clothes and other assistance as the survival needs,” the lawmaker asserted.

Garima Shah of CPN (Unified Socialist) condoled the death of Nepali pilgrims who died in a bus accident in Lucknow of India recently. CPN (Maoist Centre)’s Bina Pokharel described the new government as the ‘rainbow government’ in the form of a national government, saying it has increased enthusiasm of the Nepali people. She hoped that the government would be capable enough in giving good governance and taking the nation on the path of prosperity. The votes PM Pushpa Kamal Dahal has received while taking the vote of confidence proved this.

Sumitra Devi BC of UML said air accidents have been repeating frequently in the country as necessary precautions have been ignored, calling for strictly conducting technical test of aircraft before the flight and at regular intervals for making the air travel safe and reliable.

CPN (Unified Socialist)’s Rajendra Laxmi Gaire commented that the provincial structure was still in a state of helter-skelter due to the incomplete policy and procedures. She also called for better management of Nepal Police, strengthening the law and order situation and making the passport distribution system smooth and easy.

Sharada Devi Bhatta of the Nepali Congress called attention of the government to provide fertiliser and seeds to farmers in time as they are at the receiving end. The government has no excuse that it has not been able to function well as it has overwhelming support.

Nepali Congress’ Narayan Datta Mishra said even the Tundikhel open space has been encroached upon in Kathmandu. He reiterated that the Nepali Congress even now has the responsibility of taking all types of forces ahead together.

Maoist Centre’s Gopi Bahadur Sarki Acchami said the people’s hope and trust has increased to some extent towards the political parties after the formation of the present government. “There is need of national unity, collaboration and cooperation among the political parties for development, prosperity, establishing good governance and corruption control,” he said.

Meanwhile, speaking in the Zero Hour of the National Assembly before this, the upper house of the Federal Parliament, lawmakers drew attention of the government on the need of making the Nepali sky safe.