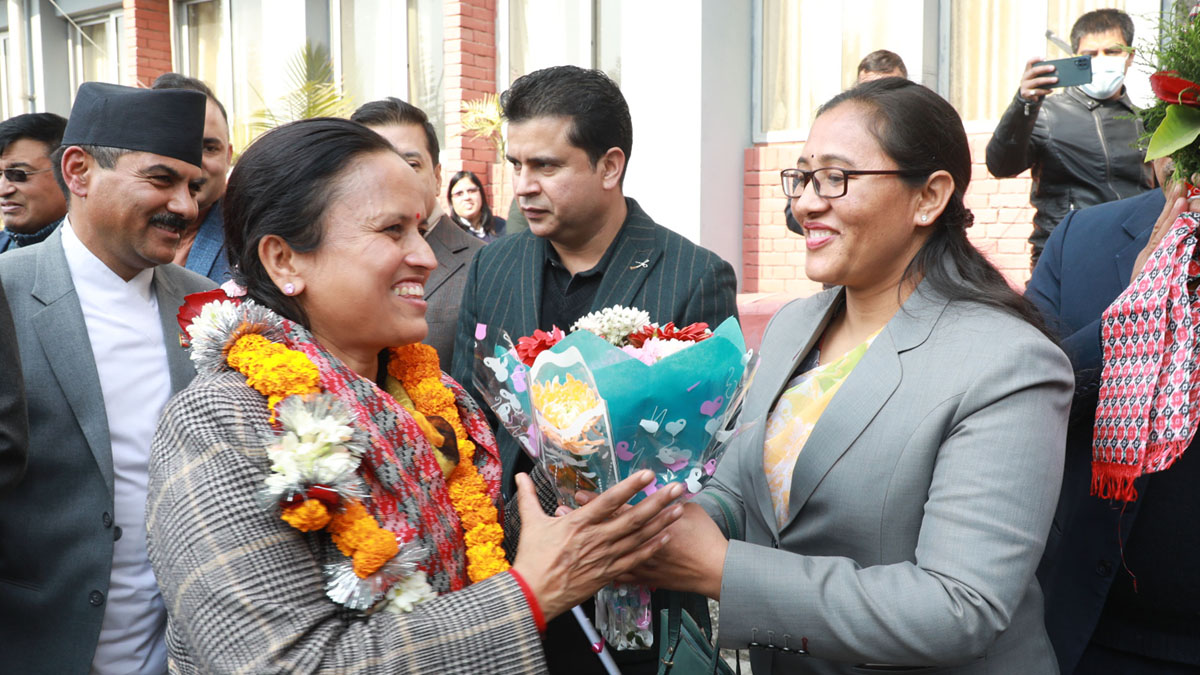 Newly appointed Minister for Communications and Information Technology, Rekha Sharma, assumed office today shortly after she took an oath of office and secrecy before the Head-of-the State.

The new Minister reached the Singha Durbar to assume office following the swearing-in ceremony at the Office of President, Sheetal Niwas.

Assuming the office, the Minister digitally launched the ‘programme to ensure access to communications’.

On the occasion, the Minister pledged her special role to extend communications and technology services nationwide. She vowed to work collectively in efforts to make communications services easily and widely accessible.

Talking to media in brief, she said she was fully committed to fulfilling the responsibilities allotted by the party, but still needed support and cooperation from all quarters for the same.

She was the proportional representative (PR) member in the previous House of Representatives and the 2013 Constituent Assembly member. She was appointed the Minister for General Administration in 2015 and remained in the post for a year.

Born in Masina of Ghorahi on September 25, 1969 to mother Parbati Sharma Poudyal and father Giriraj Sharma, she began her political career at the age of 16 as a school student union member of the All Neal Free Students Union. Late she was the Dang district vice chair for the Union, district chair for ALL Nepal Women’s Association (Revolutionary), its central member, the YCL central member and the central chair of the Association from 2053 to 2057 BS. She was the whip for the Maoist parliamentary party in 2013 CA and 2017 HoR.

She became the central member of the CPN (Maoist Centre) in 2057 BS and took her role as the deputy politburo in-charge for the Kathmandu member. In 2002, she was detained by the then Royal Nepal Army together with her spouse Krishna Dhwaj Khadka from Chabahil and the couple was put in the NA Lalitpur-based Rajdal Battalion and Pokhara NA Barracks for a year and was released on April 14, 2003 with commencement of the government and the then rebel Maoist talks .

Sharma who holds a Master’s degree in Sociology is taken as an established women leader in the party. She is the permanent resident of Ghorahi Submetropolis-18, Dang.