Parties, election candidates to be allowed to hold rallies, mass meetings from tomorrow 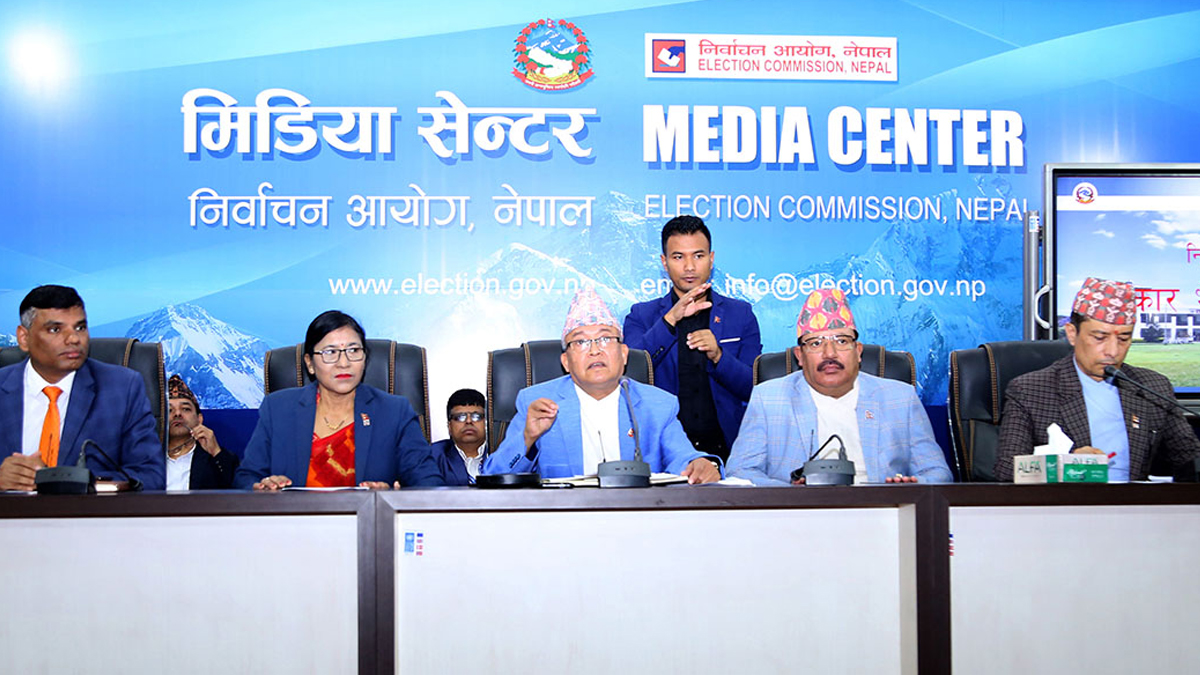 Chief Election Commissioner (CEC) Dinesh Kumar Thapaliya has urged the parties and candidates to safeguard the sanctity of the election and comply with the election code of conduct as the election campaign enters the second phase from November 3.

In the second phase of the electioneering from tomorrow till November 17, the parties and candidates are allowed to organize rallies, mass assemblies and corner meetings in course of electioneering.

CEC Thapaliya said this while addressing a press conference the EC organized today, a day before the second phase of the election campaign commences. He said that the EC has so far asked for clarifications from 71 individuals and organisations in connection to the violation of the election code of conduct and they are in the process of responding to that. The process of collecting facts and conducting an investigation is on in this connection.

“The code of conduct in itself is a moral and legal bond. If the parties, candidates and other sides do not break this bond, then there will be no need for the Commission and the state mechanisms to initiate action,” he said and warned that the Election Commission will ask for a second explanation from the code violators if the first one is not satisfactory, and it might also reprimand, impose fine and penalty and even decide to suspend the candidacy looking at the degree and nature of the violation and on the basis of evidence.

We will take a decision on the complaints of code violation received so far by November 11, CEC Thapaliya said.

He stated that the EC expected all sides’ participation in the election and necessary coordination is being established with the security bodies to curb the possible election-disturbing activities, urging the parties and candidates to rise above the kind of abominable situation of installing fences at the vote counting station since such a situation is not palatable in democracy.

Arrangements are in place to monitor whether government ministers (federal and province) follow the rule to take permission to use government vehicles during the election publicity campaign.

The code of conduct requires election candidates to present the details of the expenditures of the publicity campaign to the Election Office within 15 days of the completion of the voting.

The expenditure details should be presented in the format determined by the EC. Likewise, the receiving of any voluntary monetary assistance from political parties and its expenditure should be in line with the Act relating to Political Parties and Clause 16 of the Election Code of Conduct-2022. Political parties are required to present the election expenditure details to the EC within 10 days of the completion of the voting.

The EC is working in collaboration with the companies of respective social sites to regulate social sites in view of the possibility of the spread of disinformation, misinformation, hate speech and propaganda in an organised way to meet the vested political interests during the election period.

The EC has urged one and all not to ‘misinterpret’ such regulation and to understand it as an attempt to ensure the citizen’s right to the freedom of expression and voters’ right to be well informed.

The Commission has bestowed authority to those committees to bring to book those monitoring officials violating the code of conduct in the same place where the violation took place.

The Commission has sought clarification from 71 individuals and organizations for breaching the code of conduct enforced since September 28 this year to till date.

The Commission was investigating into clarification submitted by the alleged erring individuals and organizations and taking a needful course of actions, Commission’s Spokesperson Shaligram Sharma Poudel.

The provisions in the Election (Offense and Punishment) Act-2073 BS which prohibits unethical influencing of voters, luring voters with cash and in-kind gifts, assassinating characters, inappropriate use of government vehicles and resources, breaching the confidentiality of the election among others would be strictly implemented, reaffirmed Spokesperson Poudel. (RSS)