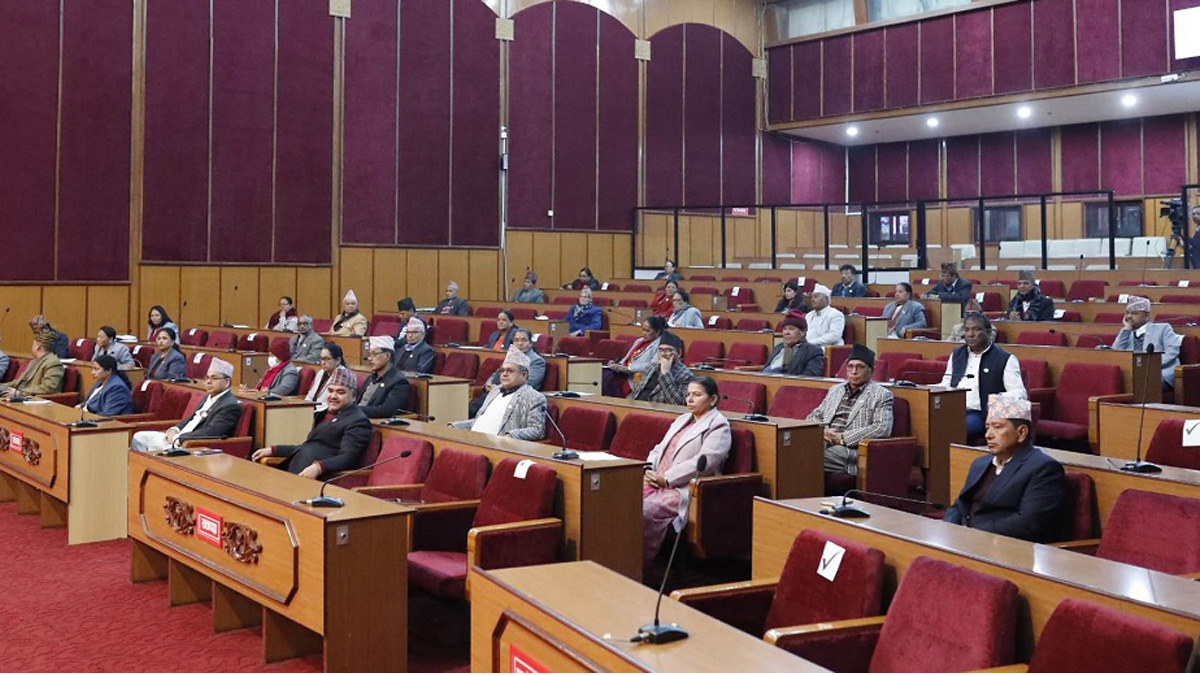 A very first session of the National Assembly (NA) in the aftermath of the November 20 elections kicked off at the New Baneshwor-based Federal Parliament Building. At the beginning of the meeting, NA Chair Ganesh Prasad Timilsina welcomed the upper house members to the session.

The session observed a minute’s silence in commemoration of all those known and unknown martyrs who sacrificed their valuable lives for the cause of the achievement of democracy in the country.

Similarly, NA Chair read out letters received from the Office of the President in regard to the summons for the House session, the appointment of the Prime Minister and the constitution of the Council of Ministers before the meeting.

Extending best wishes to the NA members on behalf of the party at the commencement of the session, CPN (Maoist Centre) Urmila Aryal congratulated the newly formed Council of Ministers. She called on all the concerned to support the newly formed government and cooperate with it to convert into ‘the government of national consensus”.

She took time to advise the government to incorporate economic targets along with double-digit economic growth in the minimum common programmes that the government is expected to unveil very soon.

She urged the government to give special attention to poverty alleviation, prompt endorsement of the citizenship bill, more vibrancy to the SAARC affairs and mainstreaming the economic and self-employment issues of suppressed women in the Tarai-Madhesh.

Similarly, Ramesh Jung Rayamajhi of the Nepali Congress said the erstwhile government led by the NC left its mark by successfully conducting the elections from the local to the central level.

The same elections paved the way for forming a new government and parliament by consolidating a path for democracy. Though the country observes a multiparty democratic system, there is no situation to be sure that corruption and misconduct would be prevented, according to him.

Citing that to make youths aspiring to go abroad as they saw ‘no future’ at home change their plan was the major challenge of the hour, he said the problem would be sorted out if the government could deliver in the interests of the nation and the people. He assured of the party’s constructive role as the opposition in the House.

CPN (UML)’s Devendra Dahal urged the opposition to wait and see the government’s performance over the 100 days. “Nation’s economy is not encouraging,” he said, urging the government to prioritise the issue of foreign migrant youths and take efforts to get back to the country and seek self-employment opportunities within the home ground.

As he said, in the case of Nepal, the leftist unification failed to sustain, but the collaboration was in the practice. “Party unification sans a strong foundation fails to get sustainability.”

He added the incumbent government was expected to do its role successfully. “The parliament is majorly for drafting laws and but this has been a secondary role of the parliament in the case of Nepal.”

He also took time to urge the government to make measures to keep people safe from the consequences of cold waves in the southern plains.