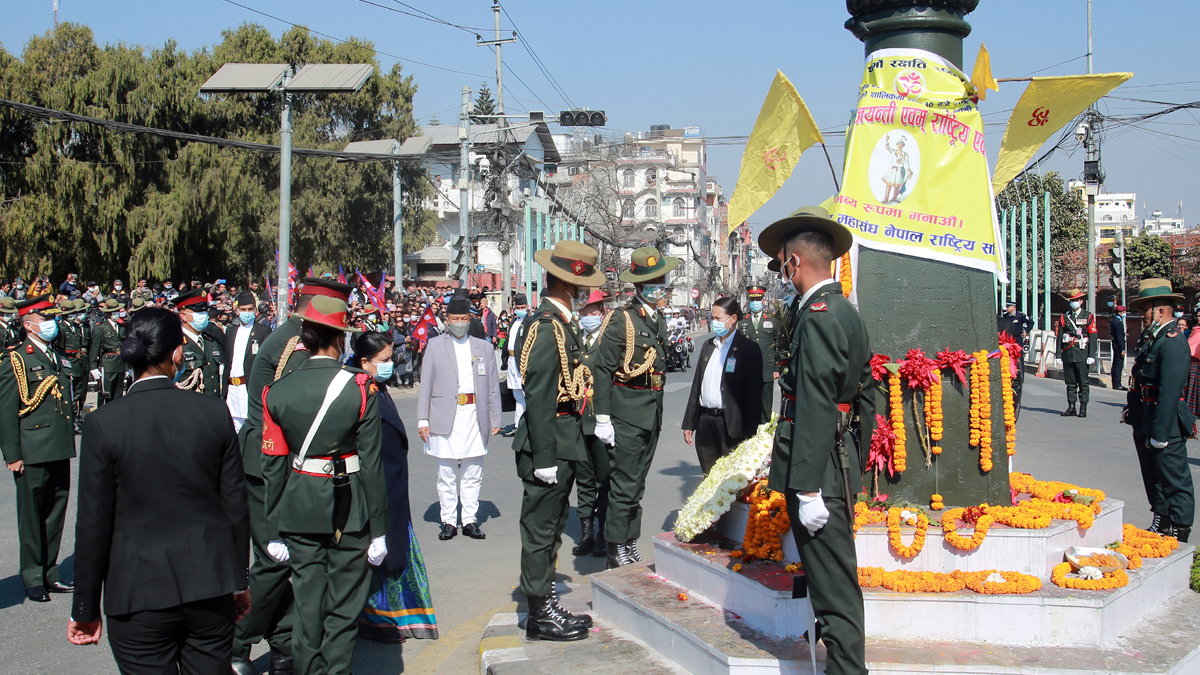 President Bidya Devi Bhandari has laid a wreath on the pedestal of the statue of Prithvi Narayan Shah in front of the West Main Gate to Singha Durbar on the occasion of the Prithvi Jayanti and National Unity Day today. Today marks the 301st birth anniversary of Prithvi Narayan Shah who initiated the national unification campaign in 1743.

There is a crowd of people in front of the West Main Gate of Singha Durbar waiting to offer respect to the late king on the occasion of Prithvi Jayanti. Leaders and cadres of various political parties, members of the civil society and people from various walks of life are present in the programme.

Rastriya Prajatantra Party (RPP) has also organised a rally from local Bhrikuti Mandap to the West Main Gate to Singha Durbar. The party garlanded the statue of the late king amidst a procession. The programme venue was reverberating with the sounds of musical instruments, conch blowing and chiming of bells.
The birth anniversary of the Builder of the Nation, Prithvi Narayan Shah, is commemorated on Poush 27 every year across the country by organising various programmes.

Born to father king Nara Bhupal Shah and queen Kaushalyawati on Poush 27, 1779 BS, Prithvi Narayan Shah was enthroned as the King of the then Gorkha kingdom on Chait 25, 1799 BS.

Prithvi Narayan Shah initiated a campaign of unifying the various tiny principalities after his enthronement. Nepal was divided into 52 small kingdoms at that time. During his reign, Prithvi Narayan became successful in expanding Nepal’s border from Chepe river in the west to the Tista river in the east.

After his death, his successors further expanded Nepal’s territory to Killa Kangada in the west.

The 301st birth anniversary of Prithvi Narayan Shah is observed across the country on Poush 27 every year paying tributes to him for his role in the unification campaign of Nepal, taking the help of people of all castes and languages.

The government has given a public holiday on the occasion today.