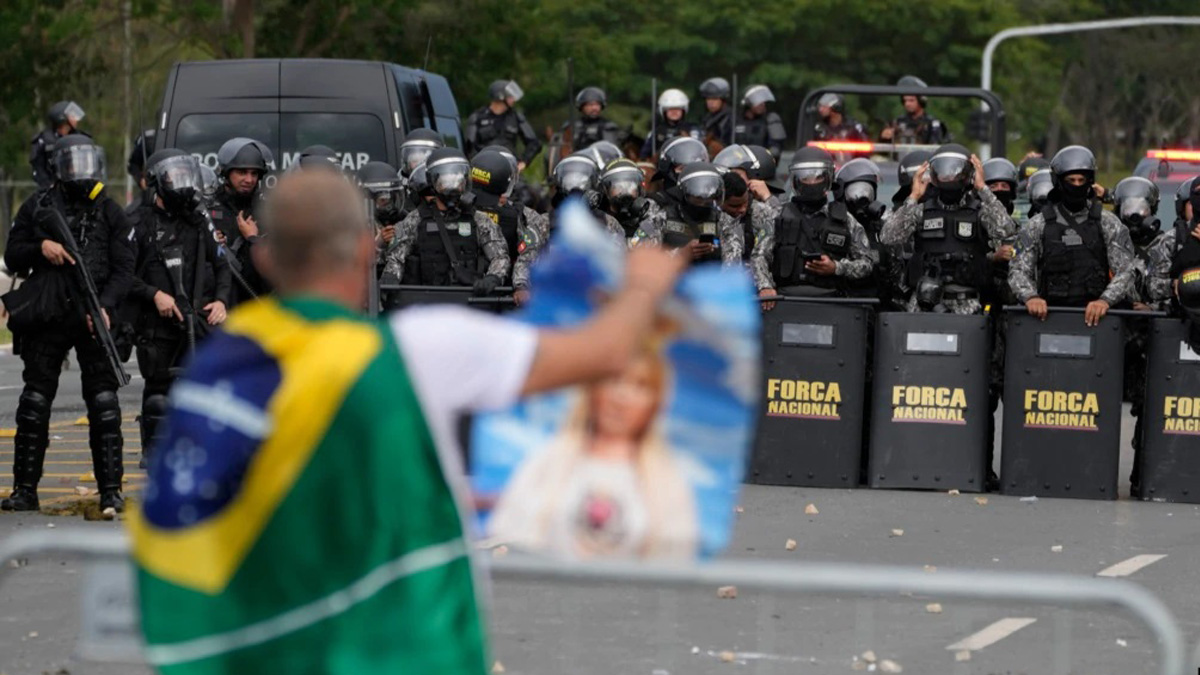 A supporter of Brazil's former President Jair Bolsonaro is confronted by a police phalanx after demonstrators stormed the Planalto Palace in Brasilia, Brazil. Planalto is the official workplace of the president of Brazil/Photo: AP

RIO DE JANEIRO: Supporters of former Brazilian President Jair Bolsonaro who refuse to accept his election defeat stormed Congress, the Supreme Court and presidential palace in the capital on Sunday, a week after the inauguration of his leftist rival, President Luiz Inácio Lula da Silva.

Thousands of demonstrators bypassed security barricades, climbed on roofs, smashed windows and invaded all three buildings, which were believed to be largely vacant and sit on Brasilia’s vast Three Powers Square.

Some of them called for a military intervention to either restore the far-right Bolsonaro to power or oust Lula from the presidency.

In a news conference from Sao Paulo state, Lula said Bolsonaro had encouraged the uprising by those he termed “fascist fanatics,” and he read a freshly signed decree for the federal government to take control of security in the federal district.

“There is no precedent for what they did, and these people need to be punished,” Lula said.

TV channel Globo News showed protesters wearing the green and yellow colors of the national flag that also have come to symbolize the nation’s conservative movement and were adopted by Bolsonaro’s supporters.

The former president has repeatedly sparred with Supreme Court justices, and the room where they convene was trashed by the rioters. They sprayed fire hoses inside the Congress building and ransacked offices at the presidential palace. Windows were broken in all of the buildings.

Bolsonaro, who flew to Florida ahead of Lula’s inauguration, has not commented on Sunday’s events.

Police fired tear gas in their efforts to recover the buildings and were shown on television in the late afternoon marching protesters down a ramp from the presidential palace with their hands secured behind their backs. By early evening, control of the buildings had been reestablished, Justice Minister Flavio Dino said in a press conference that roughly 200 people had been arrested, and officers were firing more tear gas to drive lingering protesters from the area.