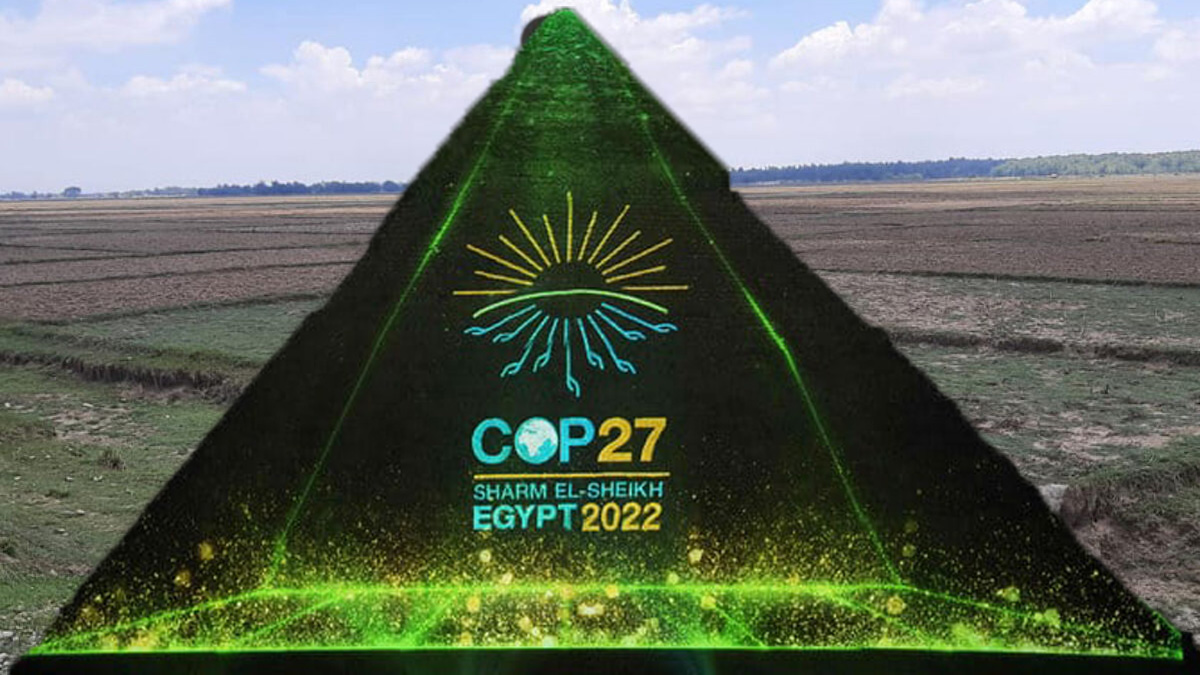 “Climate change is landing blow after blow upon humanity and the planet, an onslaught that will only intensify in the coming years even if the world begins to bring down greenhouse gas emissions.” It is the severe warning of the Adaptation Gap Report-2022 released by the UN Environment Programme just five days back.

The report is titled, ‘Too Little, Too Slow.’ The very title of the report suggests that global efforts on climate adaptation to reduce vulnerability are meagre and the pace too is quite slow to reduce the intensity of climate change impact. The report stated that the adaptation finance flows to the developing countries are 5-10 times below estimated needs with widening gap.

It estimated that USD 160-340 billion is required for annual adaptation needs by 2030 and USD 315-565 billion by 2050.An Equally alarming and appalling report the UNEP released was on the emission gap in the last week of October.

The Emissions Gap Report 2022 was prepared based on the pledges countries made since COP26 – held in 2021 in Glasgow, UK. According to which, they make a negligible difference to predicted 2030 emissions and that we are far from the Paris Agreement goal of limiting global warming to well below 2°C, preferably 1.5°C. “Policies currently in place point to a 2.8°C temperature rise by the end of the century. Implementation of the current pledges will only reduce this to a 2.4-2.6°C temperature rise by the end of the century, for conditional and unconditional pledges respectively,” the report further warned.The report points out the need of an ‘urgent system-wide transformation’ which it argues can deliver the huge cuts required to limit greenhouse gas emissions by 2030: 45 per cent compared with projections based on policies currently in place to get on track to 1.5°C and 30 per cent for 2°C. These reports reflect how slow and negligible global efforts are on reducing climate change vulnerabilities.

Yawning gaps in adaptation and ambition are a terrible threat to humanity. Amidst such background, the 27th Conference of Parties under the UN Framework Convention on Climate Change (UNFCCC) is commencing today in Sharm El Shaikh city of Egypt. It will last till November 18.The COP27 is being keenly observed from across the globe on whether it would be able to deliver the results, thereby fulfilling the past commitments since the Paris Agreement to Glasgow Pact. Nearly 30,000 people, including government delegates and climate scientists, from more than 190 countries are attending the mega events and voicing their concern.

The voices are being raised from individual nations, and in groups as least developed countries (LDC), developing countries and developed countries. It is worth noting for Nepal as we are the LDC and aspiring to be graduated to the status of a developing country but highly dependent on international finance for climate adaptation, mitigation and resilience.It is said a total of USD 46 billion is required for Nepal in climate financing by 2030.

It is humungous indeed that the government is not able to afford, so no option but to request for international support and urge the private sectors within the country to walk together on climate change issues and development activities.When it comes to financing for adaptation, which Nepal is taking as an important agenda to raise in the COP27, a report states that from 2012-2020, Nepal received about USD 4.416 billion in climate finance resources through various international, bilateral, and multilateral sources for climate change adaptation and mitigation.

The report ‘Capitalizing Green Finance for Nepal’ published by Oxford Policy Management (OPM), UK in October this year, further stated that based on the analysis of all the possible sources of climate finance that could be available to meet the financing targets of National Adaptation Plan and Nationally Determined Contribution by 2030, it is estimated that about 56.5 % of funding gaps exist to meet the climate commitments target.

With this mindset, Nepal is raising the mountain issues, loss and damage in a vibrant manner. Similarly, it will remind the developed countries of the commitment of 100 billion US dollars per year for climate finance. Not only Nepal, the entire LDC is all set to be vocal on loss and damage this year too. Chair of the LDC Group at UN Climate Change negotiations, Madeleine Diouf SARR (Republic of Senegal), wrote in Nature, “As the chair of the LDC Group on Climate Change, I represent 46 nations that are home to nearly one billion people.

This month, I will be among those calling on governments to establish a loss-and-damage fund for developing countries during COP27 in Sharm El-Sheikh, Egypt. Research estimates that US$290 billion to USD 580 billion per year will be needed by 2030.”It is worth reminding that although the low and middle-income countries had proposed a Loss and Damage Finance Facility in the COP26 last year, the developed countries had denied it.

Rather they had offered three-year dialogue on it. Similarly, the LDCs, including Nepal, are up in arms to press the developed and rich countries to double the climate finance. According to the LDC Chair, the global fossil-fuel subsidies from 2021 alone reached US$697 billion, which she argued could pay for the climate-related economic losses suffered by the most vulnerable countries from 2000 to 2019 and still have US$170 billion in profits left over.”

At home in Nepal, the Ministry officials are insisting on grants rather than loans for climate finance. So, in case the rich countries agree to double climate finance, additional dialogue and discussion are imperative for the modality of finance flows- grant or loan.Climate change and global atmosphere ‘Phase out’, ‘Phase down’, and ‘water down’ were some of the significant phrases surfaced in the COP26 and used by the media alike. The news stories with these phrases clearly indicated that climate change is an international political issue too. It is linked to global political power as well.

How the rich countries ‘water down’ the entry of loss and damage mechanism in the Glasgow Climate Pact proposed by the vulnerable countries, and how intense the debate was there among the western countries and the emerging economies on inserting ‘phasing out’ or ‘phasing down’ of use of coal in the negotiation and pact.

As the COP27 is being held in the background of alarming cases of loss and damages which are showcased by several reports and the global development of the Ukraine War, how do the international experts on climate change observe the climate summit? I had put forth queries to the Director for Climate Change at the International Institute for Environment and Development, Clare Shakya, on whether the Ukraine War diverted developed countries’ attention from pressing issues of climate change and how it would affect COP27.

She responded, “COP27 is taking place against a backdrop of global challenges, including the war in Ukraine but also soaring food and energy prices and the ongoing repercussions of the COVID-19 pandemic. That context certainly makes it harder to focus minds on the urgency and importance of the climate negotiations. But delegates should also have the recent devastating floods in Pakistan, record high temperatures in Europe and crippling drought in the Horn of Africa to serve as reminders that climate change impacts are no less urgent than other global challenges.

“Similarly, the LDCs including Nepal are insisting on doubling climate finance by the rich ones along with special attention on loss and damage, how the rich countries would respond to it is equally meaningful for us. In the question whether the developed ones would be positive for loss and damage, expert Shakya viewed, “Loss and damage has at least emerged as a strong agenda recently with the Scottish and Danish governments both pledging moneys specifically to address it.”

She points out the need for more and better pledges to tackle how countries can be supported technically to deal with the losses and damage they are already facing. According to her, domestic politics guides how the countries respond to the sensitivity of climate change. On to the politics of climate, she observed, “Sensitivity and responsiveness of different governments varies depending on their domestic politics. You only have to look at the recent presidential election in Brazil to see how the fortunes of the environment can vary from one moment to the next.

Having Brazil and Australia bringing in new governments prepared to act on climate change has been crucial. But we need to see more action across the G20 – not least from the USA and China, but also the likes of Indonesia, and indeed Russia too.

“The expert’s observation reflects that irrespective of the global political tussle and power game, climate change is undoubtedly a global issue of urgent attention, engagement and action. All sorts of countries must be made responsible toward this crucial problem of our time. However, looking from LDC, if the differing stands of parties continue on climate change negotiation this time too, the vulnerable countries and communities would be further jeopardized.

It is time for all to unite for a secure collective future. Good governance is needed at home Undoubtedly, climate change is both global and local concern. It is also the admixture of environmental and sociopolitical problems. As a vulnerable country, Nepal has no option but to negotiate effectively in the most significant global climate change platform, COP27, and utilize the finances it receives for environment, development and climate change issues.

Development activities should concentrate on building the national economy while paying much attention to reduction of climate impact and propelling adaptation. Both the government and observers often point out that we’re smart on policy documents but lack proper implementation. The legal and policy documents prepared under the UNFCC and after COP26 must be enforced with utmost participation of local people. At a time when we have three tiers of governance, the climate change issues must be percolated at the local level with utmost cooperation and coordination.

Neither the federal nor provincial parliaments zeroed in on climate change impacts. Even in the ongoing election campaigns, party leaders are mute on this pressing agenda but engage in blame games. It suggests mere mention in the document does not suffice to cope with this defining problem of present time. Good governance and spending capacity of the government are other elusive issues, which needs serious review and immediate correction.