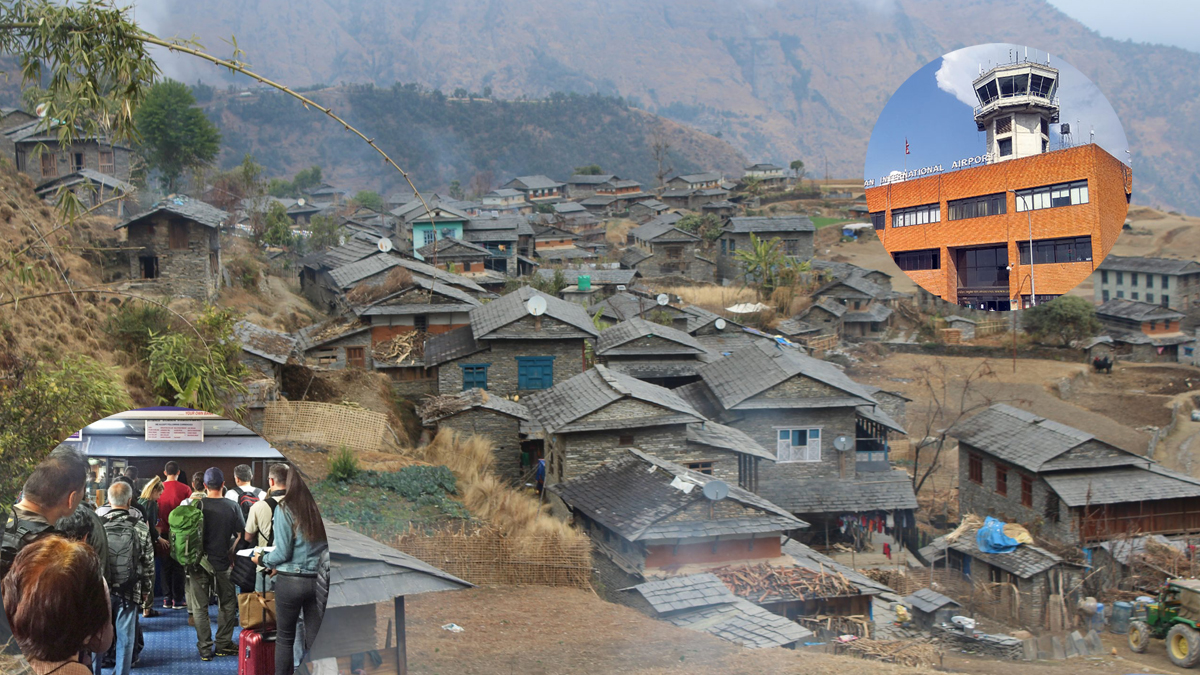 Increasing migration of people to city areas in search of better opportunities and foreign employment have depleted most of the villages in Myagdi district. Rum village is a case in point. The village at Malika Rural Municipality-2 has glittering stone-roofed and wooden houses with balconies, surrounded by greenery and smiling-like mountains in the north. The courtyards are wide while there are 12 months running water taps. There are cowsheds nearby.

Lately, facilities have added while roads have cut through cliffs. There are school, health post and irrigation facilities available in the village. These beautiful sceneries and facilities may attract anyone.
However, the village now looks deserted with decreasing human settlements.

Migration in search of better opportunities is not stopping, said Shree Prasad Rokka, former chairperson of the rural municipality.
Many other villages are depleting without human settlements. Dense settlements a decade ago are now wearing a deserted look. Migration has taken place in various settlements of Malika, Mangala and Beni Municipalities.

As a result of this uncontrolled migration, the depleted villages are struggling without people to carry out household work, farming and other personal activities, said Rokka. Security reason has also made the matter worse.

Farmlands are left barren as there are only elderly people to do farming, and youths have gone abroad for job opportunities, it has been said.

Torakhet village in Beni Municipality-3 has also met with the same fate. Dominated by the settlements of Chhetri and Dalit communities, the village has been often hit by landslides, thus prompting migration, said the local people. Inhabited by 217 households a decade ago, now the village houses only 39 families.
Most of the families in the village have migrated elsewhere, said a local leader Dil Bahadur Sapkota. The village had seen only 43 percent of voter turnout in the recently held general election on November 20.

Hundreds of families have been migrating from the western parts of the district on an annual basis, said the local level.

Better opportunities for education, health and job opportunities have been the push factors for outmigration from these villages to city areas, said Sapkota.

The decade-long Maoist insurgency that started in 2052 BS and ended in 2063 BS is blamed for driving villagers to city areas, which were considered to be relatively safe due to security reason.
The insurgency ended long ago after the signing of the comprehensive peace accord between the government and the then Maoist. But, migration did not stop, said the local people. Federalism has promised to provide facilities to even rural areas, thus controlling migration. But, it did not happen.

Concerned about undeterred migration, people’s representatives made it a political issue to take initiatives to stop it. The House of Representatives member, Kham Bahadur Sherpunja has unveiled his plan to stem outmigration.

According to Yam Bahadur Karki, ward chair of the municipality-2, 46 families have abandoned the village in the past five years. Despite development activities gradually taking place in rural areas, migration has not stopped, he added.

As a result of migration, neighbours are hardly found when one needs help, said Sher Bahadur Budha, 64, of Devisthan in Malika Rural Municipality-5. On the other hand, development activities have been affected, he added.

In general, the local people have migrated to city areas including Kathmandu, Pokhara and Chitwan. Villages getting emptied has increased insecurity, said Bhaba Bahadur Bhandari, chair of Raghuganga Rural Municipality. Foreign employment has brought wealth to people, which is good, but it has another side to show – it has prompted migration to city areas in search of better opportunities, he viewed. “Some have migrated to city areas after selling off all their properties in villages. Others have left their lands uncultivated. As a result, arable land has turned into scrubland.”

Facilities like roads, electricity and drinking water could not stop the outmigration, said Bed Prasad Upadhyay, 86, of Bagarphanta in Beni Municipality-2.

The villages now offer many opportunities and have witnessed development activities, but what they are in need is youths to utilise them, he said.

Although the trend of youths engaging in entrepreneurship back in the villages after returning from foreign employment is increasing, their first choice would still be foreign employment, said the local people.

“People ranging from school children to 45-year-old ones wish to go to foreign countries for job opportunities. When a children are asked in the classroom what they would want to be in the future. They would say they want to be a ‘Lahure’ (a person who return home from foreign employments),” said a school teacher Prem Shahi, who works for local Buddha Academy.

The mindset of youths wanting to go to Gulf countries for jobs even if they cannot make it to Europe and the United States has overshadowed many income and other opportunities back in the villages, he said.

Myagdi district annually drew remittances worth around Rs 3 billion sent by youths from the district toiling in foreign countries, according to data with banks and financial institutions. Remittances have brought wealth to villages, but not happiness, shared the local people.

“Children have bought plots and houses in city areas with money they earned in foreign lands. But, their elderly parents are unwilling to leave the villages. They cannot forget their birthplaces where they have spent most of their life, which has stopped them from leaving,” viewed Shahi.

Following increasing migration, population of the district has decreased as compared to a decade back.

According to the latest 2078 census, the district has 107,372 population, a 0.54 percent drop as compared to 113,641 in the 2068 census, said the district census officer Ghana Shyam Sapkota. “Foreign employment and migration have been a major factor behind the dwindling population,” he said.