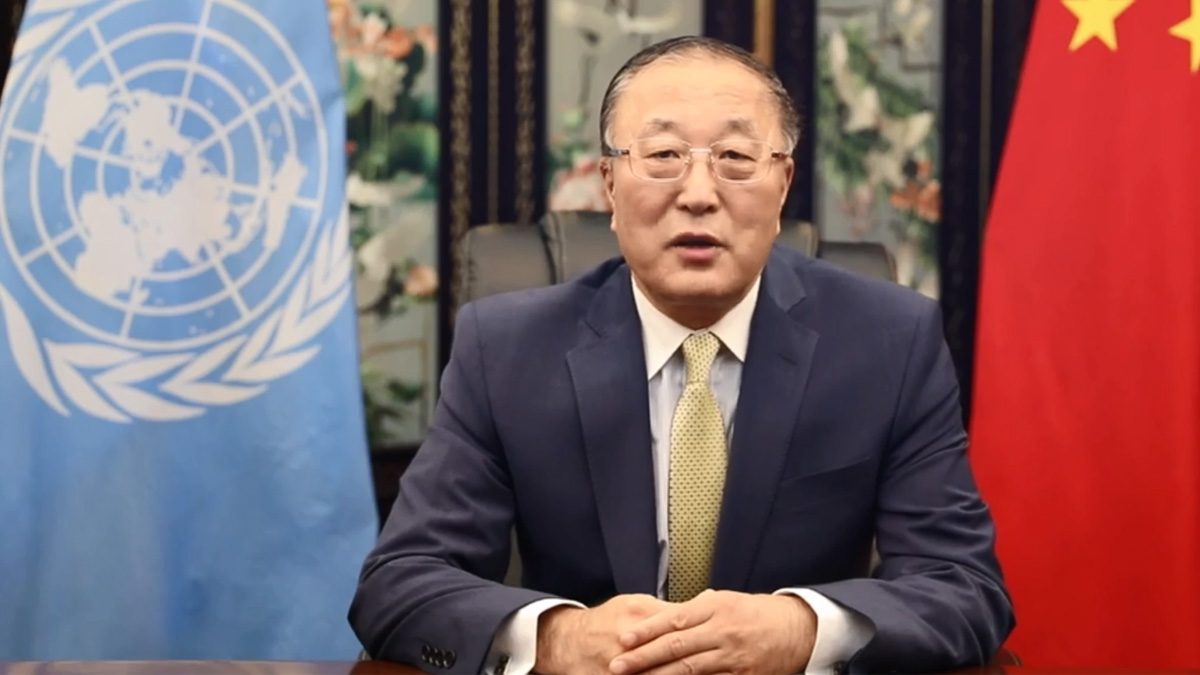 Zhang Jun, China's permanent representative to the United Nations
China opposes the politicization and instrumentalization of counterterrorism issues, double standards and a selective approach, a Chinese envoy said Thursday.
Terrorism is a global challenge, and no country has the capacity to tackle it on its own, said Zhang Jun, China’s permanent representative to the United Nations.
All countries should be aware that they are a community of shared security and that it is in their common interests to comprehensively implement all counterterrorism resolutions of the General Assembly and the Security Council and crack down on all terrorist organizations and individuals listed by the Security Council, he said.
China finds it deeply regrettable that certain countries have backpedaled on terrorism issues in recent years, Zhang told a Security Council meeting on a global counterterrorism approach. “Politicizing and instrumentalizing counterterrorism issues and practicing double standards or a selective approach will ultimately harm oneself as well as others and undermine overall global counterterrorism cooperation.”
“In the face of the common threat of terrorism, all parties should abandon geopolitical calculation and ideological bias, earnestly step-up practical counterterrorism cooperation in the judicial and other fields, support the central coordinating role of the United Nations and expedite the negotiations on the Comprehensive Convention on International Terrorism,” said Zhang.
He called for efforts to optimize resource allocation with a greater focus on the regions of the highest priority and the most pressing issues in counterterrorism cooperation.
In recent years, the direct terrorist threats faced by developed countries have decreased, leading to a relative decline in investments in counterterrorism cooperation and thus a shortfall of counterterrorism resources globally, he said.
Africa, the Middle East, and Central Asia face the most direct terrorist threats and have suffered the most serious terrorist attacks, he said, adding that therefore, their needs for upgraded counterterrorism capabilities are the most urgent.
The United Nations and the international community should, in light of these needs, appropriately increase resource allocation to help developing countries strengthen their counterterrorism capabilities and capacity-building at the legislative, judicial and law enforcement levels, he said.
Efforts are also needed to address both the symptoms and root causes of terrorism, said Zhang.
Military means alone can hardly achieve the goal of eradicating the breeding ground of terrorism. There is a need to tackle both the symptoms and the root causes, and harness political, economic, judicial and other means to respond holistically, he said.
It is essential to pursue political solutions to hot-spot issues, help countries concerned improve their humanitarian situation and prevent terrorist forces from feeding on instability, he said.
Noting that underdevelopment is a driver of terrorism, Zhang said while resolutely fighting all terrorists, countries should give due regard to economic recovery, poverty eradication, education, and employment, pursue sustainable development pathways tailored to their own national conditions so as to minimize the living space of extremist ideologies and gradually eliminate the breeding ground of terrorism.
However, he said, global development is suffering setbacks. Developing countries urgently need more international support and the international community should place the development agenda front and center, increase development assistance and help countries concerned root out terrorism through development, said the Chinese envoy.
China has always attached great importance to and actively engaged in international counterterrorism cooperation, he added.
China is willing to work with other countries to implement the Global Security Initiative and the Global Development Initiative and make new contributions to the international counterterrorism endeavor, he said.