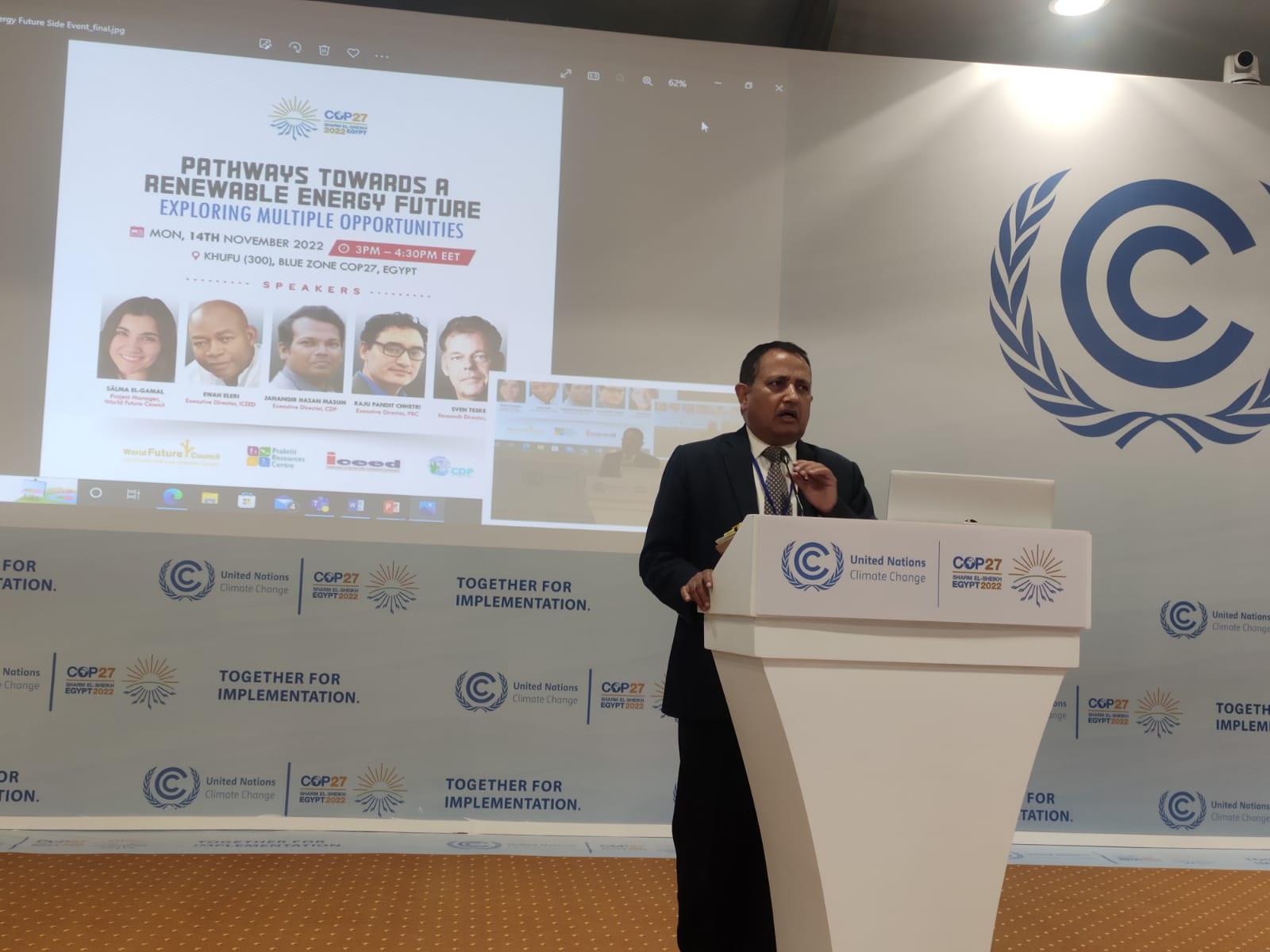 Nepal, which had been facing power cuts until some years back, is now not only in a position to fulfill the domestic demand for power, but also to export power during the monsoon.

At the same time, Nepal is moving on the path of transition to electric energy from its dependence on fossil fuels at a relatively fast pace. This will contribute to reducing the emission of so-called greenhouse gases and will also reduce the economic risk.

Ninety-eight percent of electricity in Nepal is produced from hydropower and other renewable energy sources. Nepal is producing 2200 megawatts power from these sources at present while power plants with the capacity of generating total 5,000 megawatts are under construction.

With the significant use of the clean energy, Nepal will be reducing the amount of domestic emission of greenhouse gases in the South Asia region as well. For this, Nepal needs to manage the clean energy during the dry season. By doing so, Nepal can earn revenue of 9 billion USD annually from 45 gigawatt hydropower and nine gigawatts solar power. This trade can help reduce over 100 million tonnes carbon dioxide per year.

Last year at COP26, the Government of Nepal announced its target to achieve net-zero carbon emission by 2045. However, the mainstay of Nepal’s energy sector is traditional biomass and imported fossil fuels which have adverse impacts on the environment, health, and the national economy.

Therefore, Nepal can achieve its Long-Term Strategy for net-zero emission goal only if there is major shift in energy use from traditional biomass and imported fossil fuel to clean energy sources because the energy sector is the largest contributor of Nepal’s total carbon dioxide (CO2) emission accounting for 54% of total emission.

Today, the Energy Day event is being organized as part of the 27th Conference of Parties (COP 27) of the UN Framework Convention on Climate Change (UNFCCC) in Sharm el-Sheikh, Egypt. The event is dealing with all aspects of energy and climate change, including renewable energy and energy transformation, with a specific focus on just transition in the energy sector and green hydrogen as a potential energy source for the future. Hence, this is an important opportunity for Nepal to inform the world that Nepal can play a key role in the clean energy transition within the country as well as in the region by increasing its clean energy consumption and exporting hydropower and other renewable energy generation to the neighbouring countries.

A team comprising of high-ranking government officials including Secretary at the Ministry of Energy, Water Resources and Irrigation, Dinesh Kumar Ghimire, from Nepal is already in Sharm el-Sheikh to participate in the Energy Day event.

Nepal can alter these challenges into opportunities. For this, Nepal will need to diversify its energy mix to smoothen its electricity generation curve, promote demand response to match electricity production and operationalize cross-border energy trading. Nepal can develop its immense solar potential to complement hydroelectricity generation by generating electricity during the dry season, when water flow decreases but the solar radiation is high. In addition, distributed solar storage system can provide electricity in electricity deficit areas, enhance quality of power supply in rural areas and reduced need for additional transmission infrastructure.

Similarly, Nepal can rapidly shift from the polluting energy sources to cleaner electricity to reduce its GHG emission as well as to reduce its economic vulnerability as 98% of its electricity generation already comes from hydropower and other renewable energy sources. Currently, the supply from these sources is 2,200MW while another 5,000MW are under construction. Therefore, there is opportunity for the country to move to electric cooking, electric mobility, powering all industrial, commercial, and agricultural heating, cooling and motive power with clean electricity as well as providing clean electricity to all Nepalis. By doing so, Nepal’s energy related CO2 emissions can be reduced by 8.6 million MTCO2 in 2030 and 35 million MTCO2 per year in 2045.

Besides, domestic emission reduction, Nepal can offset GHG emission in the South Asian region by exporting its significant clean electricity generation. By doing so, Nepal can manage its surplus during the wet seasons as well as could earn revenues of up to $9 billion per year from the 45 GW hydropower and 9 GW of solar power.

This trade could reduce emissions by up to 100 million tonnes of CO2 per year by substituting emissions otherwise produced from coal fired and natural gas power stations.

These figures show that Nepal can be a global leader in the clean energy transition. Energy day event at COP27 provides Nepal with the opportunity to show the world what can be done with Nepal joining the Clean Energy Transition Partnership and Powering Past Coal Alliance (PPCA) alliances. Alongside these commitments Nepal will also be asking for increased investments for clean energy resources at COP27 and recognition in the climate rules to gain recognition for its clean energy trade and emissions reductions in other countries.

UK government has already been supporting the Government of Nepal for its clean energy transition through both the GRID framework in partnership with multiple development partners and the Nepal Renewable Energy Programme (NREP). NREP is implemented through an agreement between the governments of Nepal and UK government. This programme is supporting the Government of Nepal/ Alternative Energy Promotion Centre (AEPC) to conceptualize and operationalize the Sustainable Energy Challenge Fund (SECF), the first public incentive scheme to wholly support private sector in distributed renewable energy development in Nepal.

With SECF support, solar rooftop projects, solar lift irrigation projects and above 6,000 electric cooking have been installed through a market-based approach.