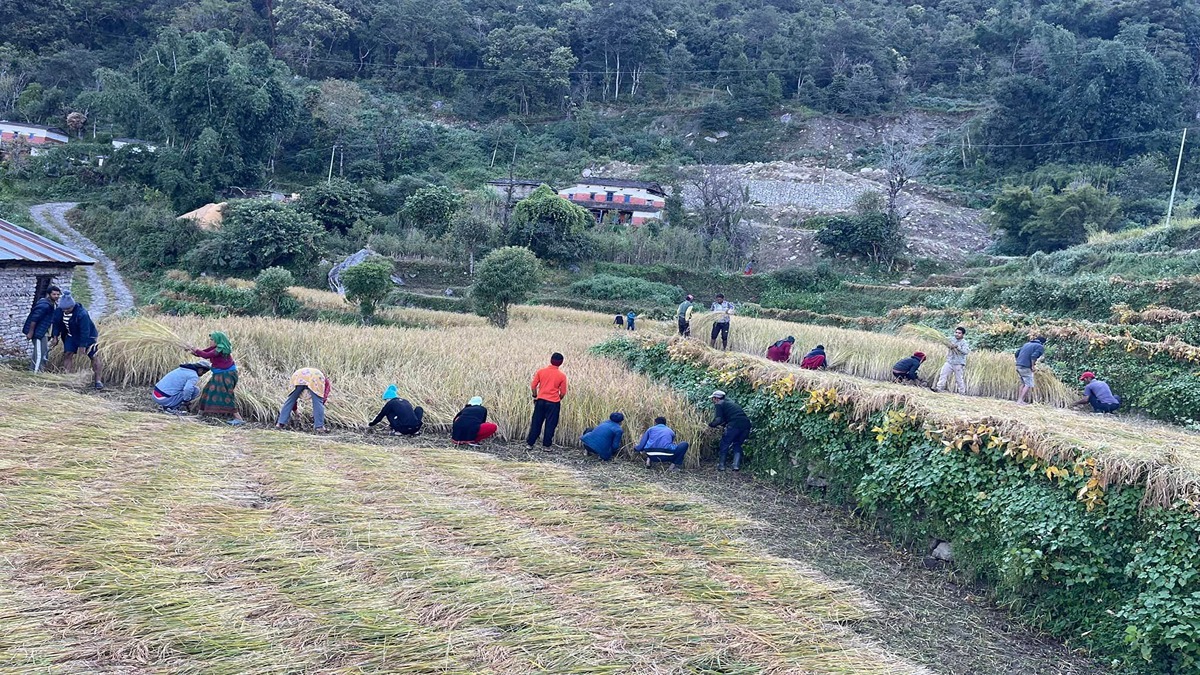 By Suman Jung Thapa, Kushma (Parbat), Oct 27: The election to the member of the House of Representatives and Province Assembly is due on coming November 20. So, the eligible candidates are busy campaigning for the election and are making several initiatives to convince the voters.

The candidates can be seen visiting the farmlands in course of the campaigning as this is the paddy and millet harvesting season and most of the voters can be met in their fields.

“We are extremely busy during the crop harvesting season. One has no time to stay at home waiting for the party leaders or candidates. After all, the leaders and candidates are not going to assist us in our farm work,” said Nabina Acharya of Dhairing.

Nepali Congress leader Yam Pariyar said they are conducting a door-to-door visit in course of the electioneering. “We found that many voters are busy in their fields when we visited their villages. We are done with the door-to-door visit in some villages for now and we will intensify the campaign again after November 3, holding mass meetings and meeting with voters,” he shared.

There is a landless squatters’ settlement near the Kaligandaki river at Maldhunga. It is populated by the Majhi and other communities. Before every election, the political party candidates visit this settlement comprising 150 households, seeking their votes. In course of the campaigning, they make promises and give assurances to the voters.

However, the voters in this poor settlement do not expect much from the eligible candidates. For this community living on the bank of the Kaligandaki for three decades, their minimum demand is that they be allowed to extract sand from the river bank and sell it without obstruction.

Their life hinges on the sand on the bank of the Kaligandaki river as the majority of them have been eking out a living by selling sand and aggregates that they extract and sell.

“The police administration hassles us when mining for sand and pebbles. They (the police) harass us and prevent us from collecting sand and aggregates. Our subsistence depends on sand and aggregate mining,” complained Pramila GC, a local. She said that, unlike the petty contractors, they do not use machines to extract sand from the river bank and river bed.

GC added that they will give their vote to those candidates who solve their major problem.

However, Dipesh Pariyar of local Karkineta, who returned home from abroad for the Dashain festival, is exited over the election. He is annoyed by the deteriorating situation of the country and enraged at the hegemony of the political parties.

“I had gone on foreign employment after casting my ballot in the election five years ago to provide for my family. Now I am back at the time of the election. We need development in our village. Let us hope we will have developed and for this to happen, we need to elect development-loving leaders,” Pariyar opined.

It looks like the main competition is going to be between the candidates of the ruling alliance and those of the CPN (UML).(RSS)