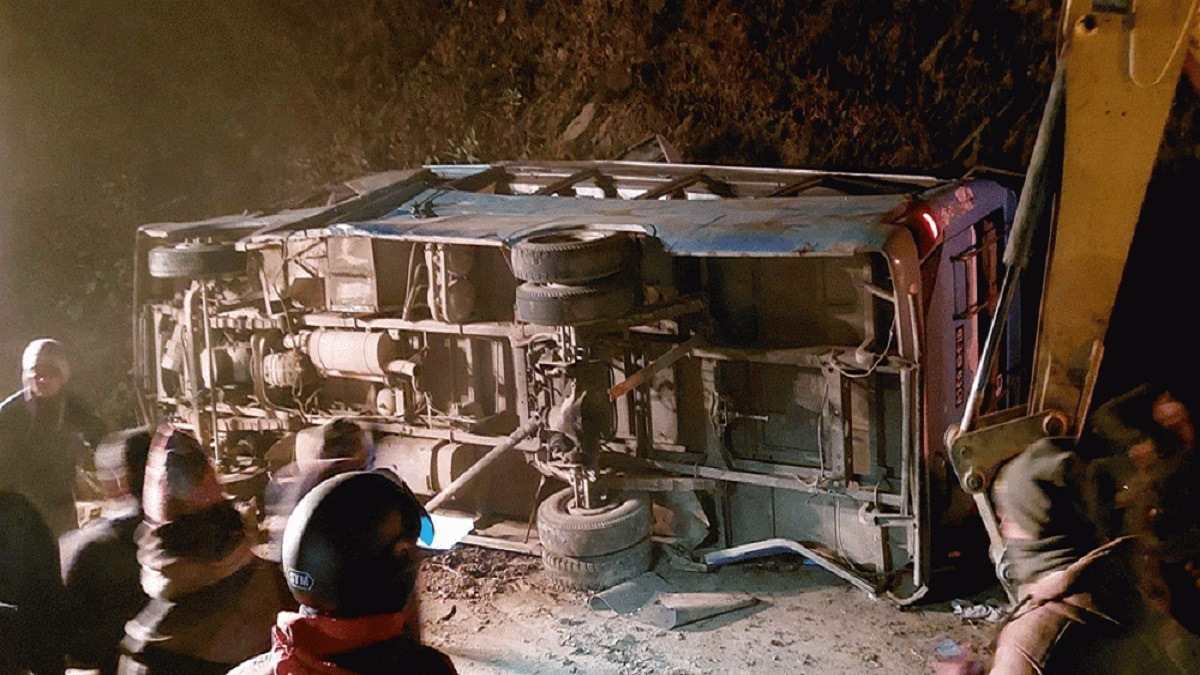 Out of 17 persons killed in a bus accident occurred at Bethanchowk Rural Municipality-4 in Kavrepalanchowk on Tuesday evening, identity of 13 has been confirmed so far. As many as 22 people were injured when a bus (Ba 3 Kha 4385) met the tragic accident while returning to Banepa from Chyalti of Banethok after attending Chewar ceremony.
Superintendent of Police (SP) Chakraraj Joshi said that the deceased are 79-year-old Nirmala tamang, 11-year-old Yogesh Tamang, 50-year-old Ankur Tamang, 43-year-old Hema Tamang, 10-year-old Pushkar Tamang, 25-year-old Kopila Tamang and 6-year-old Shreya Tamang of Banepa Municipality-11.
Likewise, Raj Kumar Tamang, 39, and Gita Shrestha, 28, of Banepa-14, Jelly Tamang, 37, of Mandan Deupur Municipality-1, Buddha Tamang, 30, of Dhulikhel Municipality-11, and Manju Tamang, 32, of Bethanchowk Rural Municipality-5 are the deceased in the accident.
Similarly, bus driver Santosh Timalsina, 22, of Mahakal Municipality-4 in Lalitpur and currently living in Panauti-4 also passed away.
SP Joshi added that the identity of four persons who died in the accident is yet not ascertained.
The health status of some passengers is critical, according to police.
As per the preliminary investigation, the bus turned turtle after colliding against a wall on the roadside due to over speed.
Altogether 39 passengers were travelling in the bus.
The injured are receiving treatment at Scheer Memorial Hospital in Banepa, Dhulikhel Hospital, Madhyapur Thimi Hospital, Bir Hospital, Neuro Hospital in Bansbari and other hospitals, Chief District Officer of Kavre Humkala Pandey said.