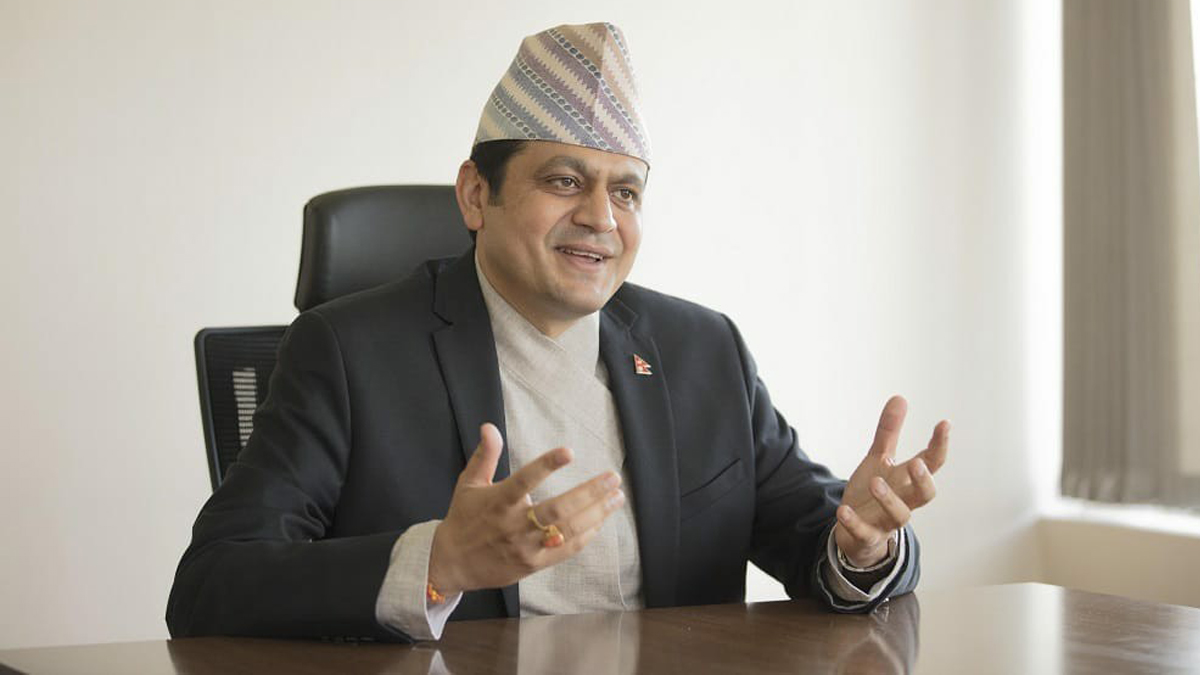 After the Government of Nepal declared the West Seti Hydropower Project as a project of national pride, it has gone through various ups and downs for nearly four decades and has now entered a new phase of development.

As per the agreement, NHPC had to apply for the survey permit within 45 days from the date of signing the MoU for the West Seti Hydropower Project and within six months for the Seti River-6 Hydropower Project.

NHPC Limited has already submitted an application as per the agreement for a survey permit for the development of the West Seti Hydropower Project.

Below is the edited part of the conversation between the RSS reporter Bhismaraj Ojha and the Chief Executive Officer of IBN, Sushil Bhatta about the progress after the agreement between the board and NHPC for the development of the hydropower project, benefits of the project, environmental impact reduction, etc.

How is the progress going on of the West Seti and Seti River-6 hydropower project?

West Seti of national pride and priority project Seti River-6 have both progressed in a result-oriented implementation framework. The agreement with NHPC of the Government of India for the construction of hydropower projects with a total capacity of 1,200 megawatts consisting of 750 MW from West Seti and 450 MW from Seti River-6 is an achievement in itself. This has led the efforts for the development of West Seti to fruition for nearly four decades. Along with this, the developer has applied for a survey permit for the West Seti hydropower project with a performance bond worth Rs 84 crore.

Likewise, the developer has paid an additional 13.9 million rupees for the study documents prepared earlier in relation to this project and will pay 30.9 million rupees within the stipulated time for the study report done earlier by the Electricity Development Department regarding Seti River-6. Permits are in the process of being issued according to the provisions of the agreement.

In the case of Seti River-6, the application for a survey permit will be received within 6 months from the date of the agreement. After receiving the survey permission, NHPC will submit the Detailed Project Report (DPR), and Environmental Study Report to the Board within two years and after its evaluation, the contract process for project development will proceed.

How to be assured that these hydropower projects will be implemented and developed?

The government of India-owned NHPC is seen as a capable company both technically and financially. The company has already completed hydropower projects with a capacity of more than seven thousand megawatts in India. In addition, a project with twice the capacity is under implementation.

As NHPC has been willing to expand its scope in the field of clean and renewable energy, NHPC seems committed in developing these two projects in Nepal. There is no question about NHPC’s financial capacity, technical competence, and commitment.

Along with these big projects, the Board of Investment has so far advanced a total of five thousand megawatt hydropower projects in a result-oriented implementation framework. The investment board’s experience in the implementation and facilitation of such large project development in the past has enabled the project to be completed in a result-oriented manner while properly managing the possible risks that may occur during the development of West Seti.

Therefore, there should be no doubt about the development of the West Seti project. I believe that local stakeholders should and will cooperate in creating a comfortable and favorable environment for project development.

Both are export-oriented hydropower projects, what are the benefits to the project area and especially to the local residents?

The development of West Seti and Seti River-6 will bring a great transformation in the economic and social development of Nepal and its direct and first beneficiaries will be the residents of the project area. West Seti has been listed as a project of national pride because this project will be transformative to bring the far western province into the mainstream of development, which is relatively backward.

From this project, Nepal will have direct and indirect benefits including free energy, revenue/income tax as well as employment, training, income generation activities, community infrastructure development, and local shares for the local community. With the free energy obtained from the project development, industrialization as well as dependence on other sources of energy can be reduced and fuel import can be reduced. The implementation of this project will be a milestone in the economic progress and industrialization of the Far West.

Management and mitigation of social and environmental impacts that may occur during the implementation of large projects are considered important aspects. What is the investment board’s plan in this regard?

How do you see the possibility of the multifaceted development of the Seti Basin?

The development of the Seti Corridor, which is also complicated in terms of geography, has gradually gained momentum. As the process of West Seti and Seti River-6 development progresses, Chilime Hydropower Company has proposed investment in its upstream Seti River-3 hydropower project.

Along with this, the upgrading of basic infrastructures such as roads, electricity, drinking water, education, and communication technology, the Seti Corridor will be the conductor of transformation in the development of the Far West. I personally see the future of the Seti Corridor as similar to that of the Arun Corridor. With the implementation of Arun III in the basin, the development of the Lower and Upper Arun hydropower projects has accelerated.

You said that the survey permit for both projects is in the process of being issued. After this, what is the future roadmap of both projects?

We are in the final stage of issuing the West Seti survey permit. And, with regard to Seti River-6, the same process will proceed within 6 months of the agreement. The initial report must be submitted to the Board of Investment within three months of the issuance of the survey permit to NHPC, and after that, the detailed study report, including the environmental study, will be submitted within 21 months and after approval, the project will enter the stage of the development agreement.

In the meantime, the Investment Board plans to take the opinions and consultations of the residents and stakeholders of the project’s affected area and to address the received opinions and suggestions by including them in the various stages of project development.