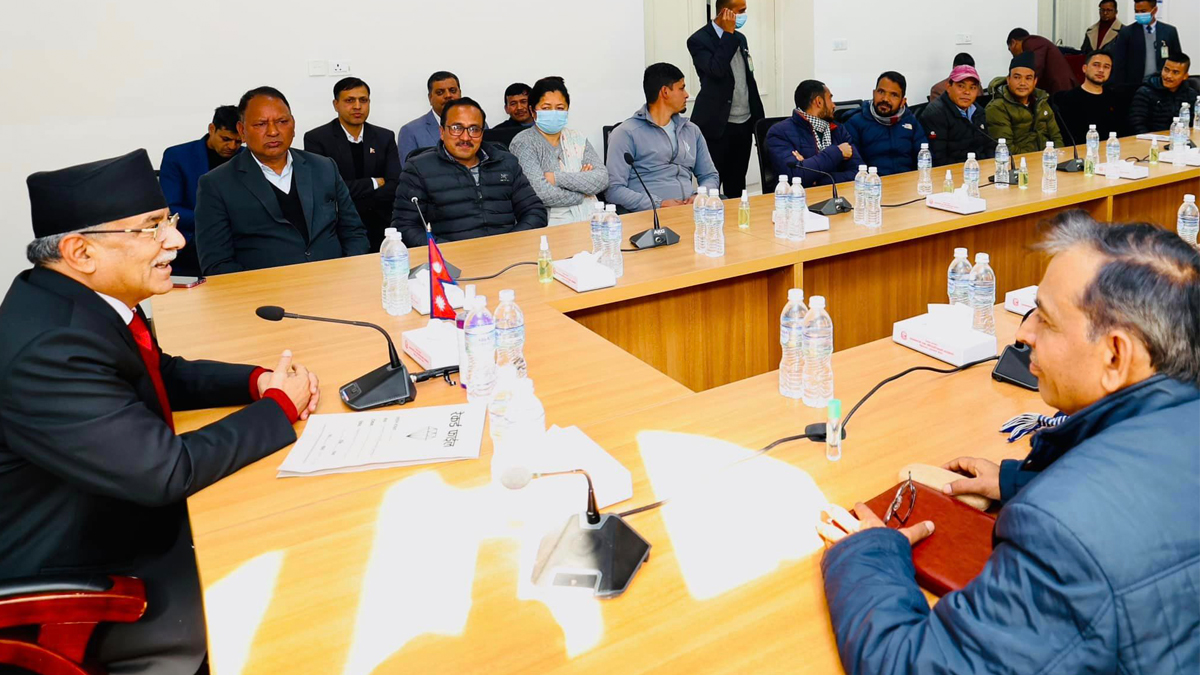 Prime Minister Pushpa Kamal Dahal ‘Prachanda’ has said it is necessary to constitute a single centre of the communists.

He said so during discussions with a team led by Communist Party of Nepal (Bahumat) – CPN (Bahumat) – at the Office of the Prime Minister and Council of Ministers in Singha Durbar today. The delegation was led by CPN (Bahumat) convenor Dharmendra Bastola.

“The provision of socialism-oriented system of Nepal has not been enshrined in the Constitution with an ordinary meaning. A discourse is also going on regarding the socialist way with Nepali characteristics at present. Discussions have started among all communist parties of Nepal on this topic. I expect constructive role from you,” PM Dahal said.

During the meeting with the PM, the CPN (Bahumat) party leaders presented various demands related to nationality, people’s democracy and livelihood of the common people.

Receiving the memorandum of demands, PM Dahal thanked the Bastola-led delegation and said most of the issues raised in the memorandum have been incorporated in the Common Minimum Programme brought by the government.

“The government is committed for developing a self-sustaining economy by protecting the national capital. I am alert regarding as to how maximum works can be carried out in the current situation,” he said.PM Dahal said the government is serious on freeing the people in detention in course of the People’s War and various movements as Tharu and Madhes agitation and struggles. He said that a bill on this would be passed by the current parliament session.

CPN (Bahumat) leader Bastola on the occasion handed a memorandum to the PM, calling for freeing the leaders and cadres in detention and topics related to the livelihood of the people.
Prime Minister Dahal assured of taking the necessary initiatives from the government for addressing most of the topics stated in the memorandum.

Meanwhile, the CPN (Bahumat) has proposed to the government to give the responsibility of operating the Bhrikuti Paper Factory based in Gaindakot of Nawalparasi to it.

Bastola, during the meeting with the Prime Minister, proposed that his party would provide the work force to operate the Factory.