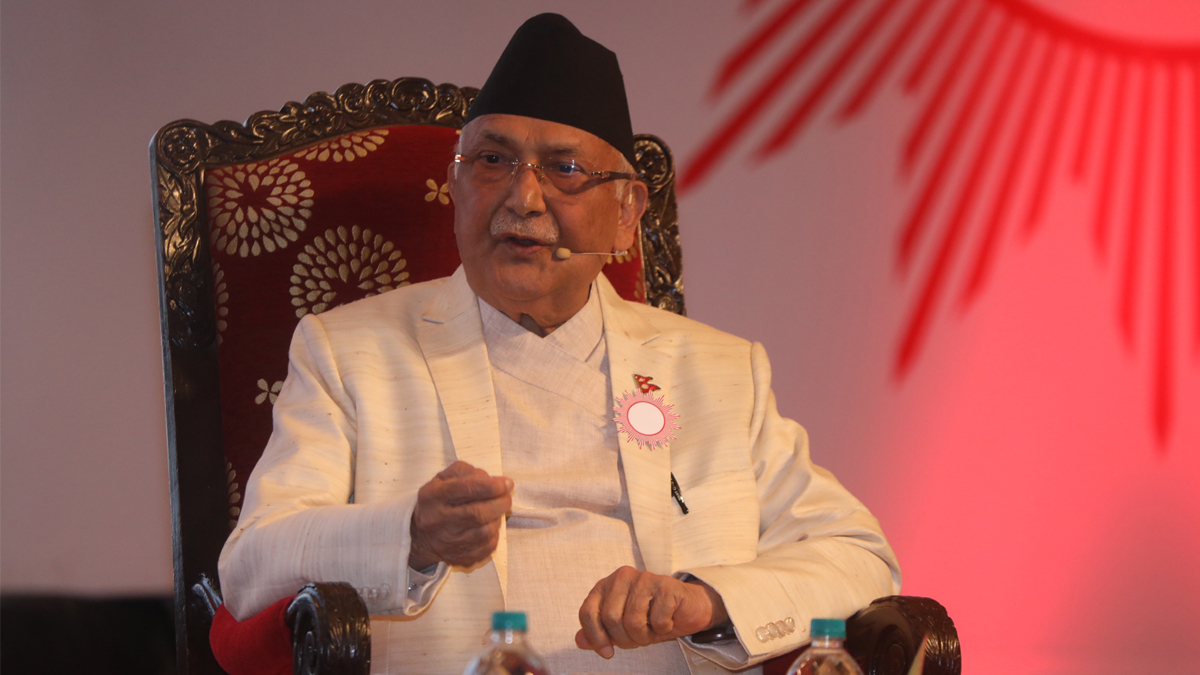 The CPN (UML) is going amidst the voters with the major resolution ‘Protection and Promotion of National Interest: Promotion of Stability, Good-governance and Development’ in the upcoming parliamentary election.

The House of Representatives and Provincial Assembly election are scheduled to be held on coming November 20. Chairperson of CPN (UML), KP Sharma Oli, appealed with the voters to think seriously before casting their ‘precious’ vote.

At a programme organized by the major opposition party to unveil its election manifesto here today, Chairperson Oli recalled that voters, by casting their vote in favor of political stability and prosperity, had made his party the largest in the previous parliamentary elections.

The party, in the digitally unveiled 20,000-words manifesto, appealed to the voters to think seriously before exercising their franchise as it argued that a single vote could make a huge difference and decide the fate of the country.
The leftist party reaffirmed its resolution to continue fighting with unwavering integrity to fulfill people’s expectations for justice, quality and prosperity.

The party chairperson while launching the manifesto digitally viewed that the upcoming parliamentary elections were a decisive opportunity to liberate the country from the cycle of various crisis. “It is an apt time to show the world that we are capable of resolving our country’s problems ourselves.”

Stating that the upcoming election going to be conducted amid a serious and sensitive national situation held a special significance, the septuagenarian leader said that every vote cast in the election would determine the future course of the country.

The party, in its manifesto, claimed that the government led by his party, amid challenges during COVID-19 pandemic, was most dynamic, productive and successful and succeeded in implementing the constitution in a short span of time.
According to the party, the provincial and local governments were dynamic, bringing on board the disgruntled parties towards following the constitution, agreement forged in implementation of constitution and acceptance of the national charter among others during the CPN-UML leadership.

During the party’s leadership, the foreign ties were further strengthened based on sovereignty equality, mutual benefits and respect and values on non-interference, the manifesto mentioned. The party took credit for resolving various unsolved issues and taking relations with foreign countries to a new height by taking forward new works.

The manifesto further mentions publication of new political map of Nepal, initiating diplomatic dialogues to take back the encroached lands (Lipulek, Kalapani and Limpiyadhura and Nepal’s quantitative development in expansion and consolidation of ties with foreign countries were one of the achievements during UML’s government.

The party claimed in the manifesto that the international sector commending the post-quake operation during the UML leadership, continuous economic growth over 7 per cent after the formation of UML government and huge increase in foreign investment were testimony to the party’s effective delivery.

The UML in its manifesto has laid emphasis on enchaining national independence and its dignity as well as ensuring welfare and sovereignty of the nation as well as political stability, peace, development and good-governance.